Robert Pattinson's Car: Maybe This is Why Kristen Cheated…

By Paula Wilson on September 26, 2012 in Articles › Celebrity Cars

During the initial furor surrounding the Kristen Stewart cheating scandal, Robert Pattinson was largely silent.  When asked about this during the press junket prior to the release of his film, "Cosmopolis", he said that he was "too cheap to hire a publicist".  While he said it half in jest, his car buying habits would indicate that the comment was not far from the mark.  An avid biker, he uses his various cars to carry his bikes around, rather than trying to attract attention in them.  In fact, he prefers to purchase second-hand vehicles.  His used car dealership of choice?  Craigslist.  Most recently, he purchased a 2001 Chevy GMT800 Silverado 1500 for the surprisingly un-movie star like price of $2,500.   (Yes, you read that number correctly.) 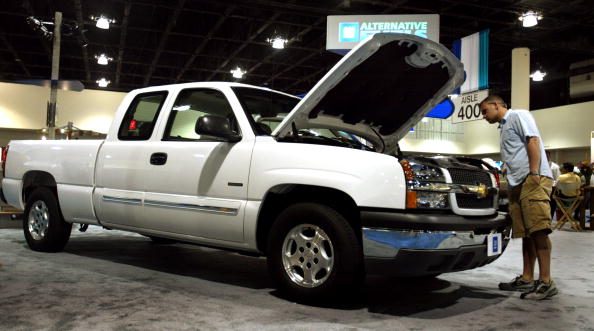 The Chevy Silverado is the more rugged answer to the GMC Sierra, and was first released in 1998.  The full-size pickups come in light duty and heavy duty models, and Pattinson's red 2001 model, sports a 5.3 liter Vortec 5300 V8 engine with 315 hp and 325 pounds of torque.  He drives the 2-door standard truck with a standard box.  Robert Pattinson's truck is exactly what he says it is, a truck for driving his bikes around, and it is as low-key and unpretentious as the star himself.