Rare Porsche 959 Could Sell For $2 Million At Auction

If you have been waiting to get your hands on the very rare Porsche 959, now could be your big chance. One of these sports cars is going up for auction through Gooding & Company during Pebble Beach week in August in Monterrey, California. This special black 1988 Komfort model 959 is expected to fetch as much as $1.8 million, so you'd better have deep pockets.

The Porsche 959 is rare because only about 330 examples were made, and of that only about 50 actually made it to the United States. The most famous owner of a 959 is Microsoft founder Bill Gates and the story actually gets pretty interesting. Gates purchased the car brand new, but it sat impounded in storage for 13 years, thanks to the Customs Service at the Port of San Francisco because the car had never been crash tested. Gates fought hard to try and change regulations, and helped inspire the Show and Display law. After the new law was passed, Gates was able to drive the car he bought over a decade earlier. Thanks in part to Gates, these vehicles can now be imported through standard methods and driven as the owner sees fit, which means they have recently started showing up for sale at auctions. 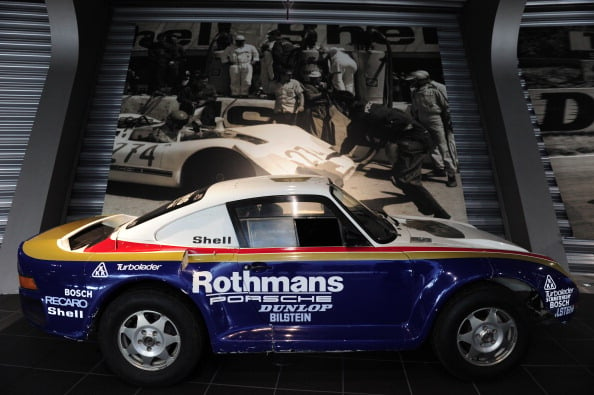 The Porsche 959 was made from 1986 to 1989. It features a twin-turbocharged 2.8 liter flat-six engine with 444 horsepower and a six-speed manual transmission. At the time it was made, the 959 was the world's fastest street-legal production car. It has a top speed of 195 miles per hour and can go from 0 to 60 mph in 3.6 seconds. It was also one of the first cars to feature all-wheel drive. The Porsche 959 has been named one of Sports Car International's Top Sports Cars of the 1980s and would have made a really cool poster in your dorm room.

Not much is known about the owner of this 959, but it doesn't appear to be Bill Gates himself. It may belong to the "unnamed American rich dude" who is selling his fleet of supercars, which is being dubbed the "Pinnacle Portfolio" and is expected to earn $65 million! No matter who the previous owner was, the new owner is sure to be happy driving this amazing luxury sports car home from the auction.