Queen Latifah's Car: A Car Fit For a Queen

By Paula Wilson on February 5, 2013 in Articles › Celebrity Cars

Queen Latifah has enjoyed a very long, successful career that has spanned music, film, and television.  When Beyonce was in diapers, Queen Latifah was tearing up the charts and appearing in high-profile projects, multi-tasking her way to super stardom.  She started out as a hip-hop artist, beat boxing with the group, Ladies Fresh, and performing with Flavor Unit.  She began to gain notice as a solo artist after her rap demo was passed to Fab 5 Freddy of "Yo! MTV Raps" fame.  From there, she signed with Tommy Boy Records, and released her first single and album in 1989.  She also launched her acting career, appearing in such films as "House Party 2", "Juice", and "Jungle Fever", and starring on the hit sitcom, "Living Single" for five years.  She then shifted her musical focus somewhat, and began performing jazz standards and ballads.  She remained in this vein for much of the early and mid-2000s, before returning to her hip-hop roots in 2008.  She also began to appear in increasingly high-profile film projects, including, "Chicago", "Brown Sugar", "Bringing Down the House", "Beauty Shop", "Stranger Than Fiction", "Hairspray", "The Secret Life of Bees", and "Just Wright".  She has also appeared in multiple successful television films, including "Life Support" and "Steel Magnolias".  Along the way, she has won two SAG Awards, a Golden Globe Award, two NAACP Image Awards, and a Grammy Award.  She has also been nominated for an Emmy, an Oscar, and six other Grammy Awards.  In other words, Queen Latifah has it going on.  She also has a car to match all of her accomplishment. 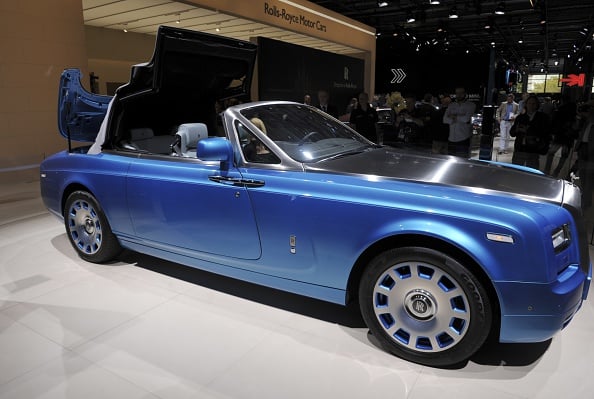 Queen Latifah's car is a silver Rolls-Royce Phantom Drophead Coupe.  The car was unveiled in 2007, and its two doors open rearward.  The car is a four-seat convertible built on a similar frame to the Phantom, but it also incorporates aspects of the 100EX, a 2004 concept car.  It runs on a V12 engine, and has 6-speed automatic transmission.  The car is outfitted with LED high beams and xenon arc lamp running lights.  The interior is relatively minimalist and is meant to replicate the feel of a British gentleman's clubroom.  The exterior can come in a variety of color combinations.  There are reportedly 44,000 possible variations.  The Rolls-Royce Phantom Drophead Coupe is the most expensive car in the Rolls-Royce line, with a price tag of $443,000.  With 25 years of success, across three mediums behind her, Queen Latifah has definitely earned that car.