By Joseph Gibson on January 18, 2023 in Articles › Celebrity Cars

Former kickboxing champ and alleged human trafficker Andrew Tate has been quite boastful on social media about his world-class collection of supercars. Some questioned whether the collection was even real. Well, we have the answer.

The good news for Andrew is that we all now definitely believe his incredible car collection was indeed real.

The collection was reportedly just seized by police in Bucharest, Romania.

It is being widely reported that Romania's Asset Recovery and Management Agency has seized 29 different "movable assets" from the Tate brothers, located at various locations throughout Romania.

The seizure apparently includes a Rolls-Royce, BMW, and Mercedes-Benz that were seen being towed away to an undisclosed government storage facility.

Other cars reportedly seized include a McLaren 765LT, an Aston-Martin Vanquish S and a Ferrari 812 Superfast (pictured below being towed away): 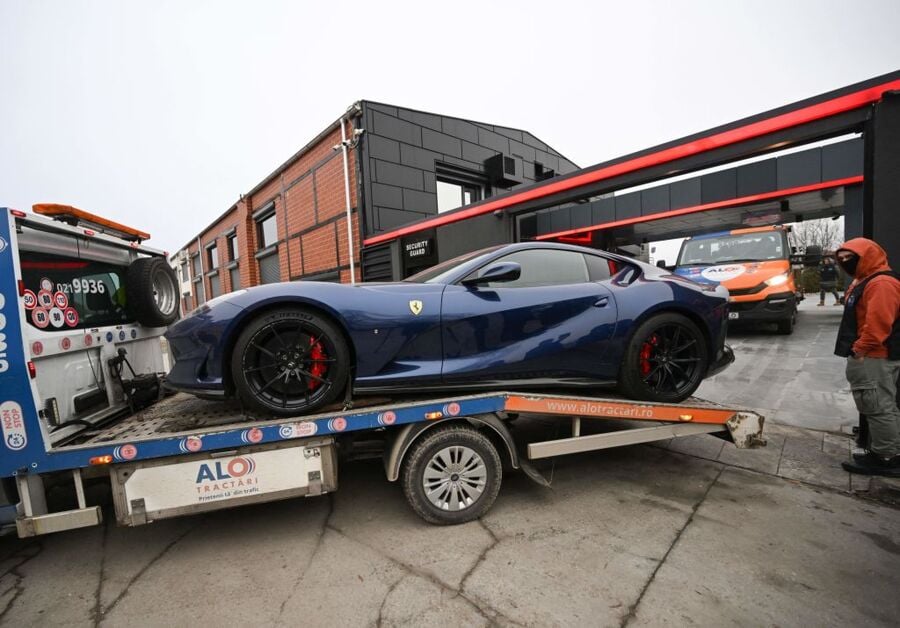 The Tate brothers and two other individuals were arrested last month on charges of human trafficking that Tate has denied. Their appeal to be released from their 30-day arrest warrant was then denied by a judge.

Romanian authorities have not revealed exactly why the cars have been seized or how they fit into the ongoing police investigation of Tate, but the BBC reported the possibility that the assets might be used as collateral against potential compensation claims from Tate's alleged victims.

Tate's big claim to fame is that he was once kicked off the British reality show "Big Brother" after footage surfaced that appeared to show him beating a woman with a belt. Since then, he has become a controversial media personality known for outrageous misogynistic statements. His arrest came shortly after his well-publicized Twitter dustup with climate activist Greta Thunberg.