Nick Mason has one of the coolest car collections of any celebrity although you might not even recognize his name. Mason is the drummer of one of the most influential rock and roll bands of all time, Pink Floyd. Nick Mason has a net worth of $100 million and is the 10th richest drummer in the world. He is the only member of Pink Floyd to remain with the band since they formed in 1965 and he wrote songs for Floyd including "Time," "Echoes," and "Speak to Me." Mason's name is one that constantly comes up when celebrity names are dropped as being owners of luxury cars.

One of Pink Floyd's most popular songs is "Money" from their classic Dark Side of the Moon album. In that famous song the line goes "Money, it's a gas. Grab that cash with both hands and make a stash. New car, caviar, four star daydream, think I'll buy me a football team." Nick Mason didn't buy a football team but he certainly took the new car line to heart.

Mason's collection is housed in two hangars at Rendcombe Airfield (a former World War I training airfield) in the English countryside. In fact there are so many cars that they are packed in tight with barely a foot of space in between each one. 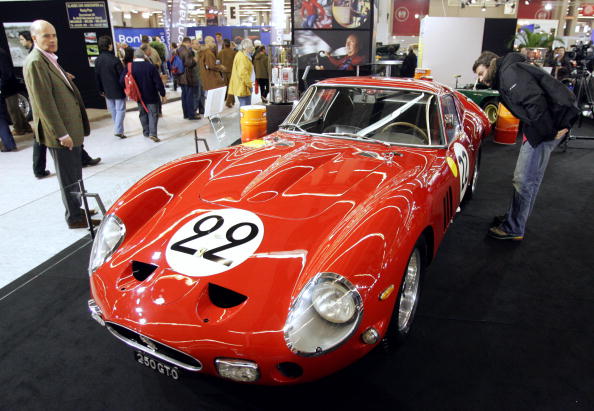 The most prized car in Mason's collection is his red 1962 Ferrari 250 GTO. This was one of only 39 of these cars ever built. It raced at the 24 Hours of Le Mans back in 1962 and has raced every single year of its life. Mason values this car so much that he once turned down a $35 million offer for it, which happens to be the base price for this model. He bought the car back in 1973 and only paid $54,000 for it! What makes this car even more valuable to Mason is that he was involved in the most expensive car crash of all time when Christopher Cox totaled his 1962 Ferrari GTO worth $31 million. After witnessing that horrific incident you can see why Mason loves this awesome car so much.

That car is just the start of Mason's incredible collection of luxury cars. He owns a green Ferrari BB/LM with a flat 12 engine with 440 horsepower that was raced by former Pink Floyd manager Steve O'Rourke at the 24 Hours of Le Mans in 1980. Mason himself raced his white Lola T297 in the same race. He owns a Ferrari 512S Le Mans that was used in the filming of Steve McQueen's Le Mans and almost toasted racing driver Derek Bell. Mason also owns a Model-T Ford that once belonged to Sennett Studios and was used in Laurel and Hardy movies. The same car later belonged to Coco the Clown before Mason got his hands on it.

Nick Mason has a truly amazing collection of cars that would probably double his net worth if he decided to sell them all. He started out his collection a bit more humble when he spent his first band paycheck on a Lotus Elan, which is a pretty cool vintage car nowadays. Once he started making money Mason answered the line from the Pink Floyd song "What Shall We Do Now" that goes "Shall we drive a more powerful car?" His answer was a resounding yes as you can see by this amazing collection.