Paul McCartney's Car: You Know You're Really Famous When…

By Paula Wilson on October 26, 2012 in Articles › Celebrity Cars

When you're famous, people give you cool things.  When you're Paul McCartney, a former Beatle, people line up to give you cool things.  Paul McCartney has been getting cool things since his band's heyday in the early 60s.  In 1964, among numerous re-releases around the globe of their first two albums, the band also released two new albums, "Hard Day's Night" and "Beatles for Sale".  1964 also marked the release of the film, "Goldfinger" and the beginning of James Bond's association with the Aston-Martin, a good British car.  The company was going out of their way to up their "hipness" factor, and they gave the young Beatle a one-of-a-kind Aston Martin DB5 to commemorate his success.  "Beatlemania" had recently become a buzzword, and the members of the band were in demand everywhere they went.  Paul McCartney appearing in an Aston-Martin was a major marketing coup.  Fast-forward almost fifty years, and Paul McCartney's former gift will go up for auction on October 31st, along with seven other limited edition, or one-off, Aston Martins. 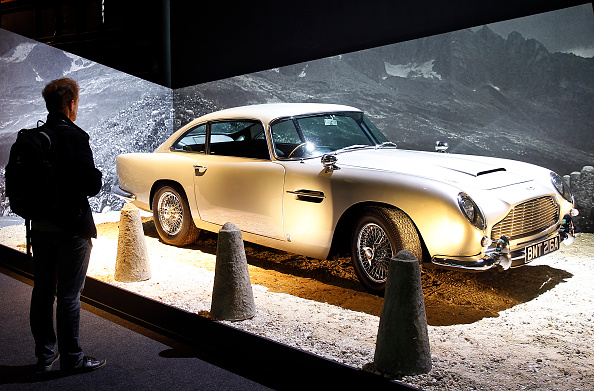 Paul McCartney's DB5 is painted Sierra Blue and has a black leather interior.  The original leather interior had musical notes stitched into it, but the upholstery has been replaced due to wear and tear.  The car also features chrome wire wheels, an Auto-Mignon record player, and Armstrong Selectaride rear shock absorbers.  It is powered by a six-cylinder engine and three SU carburetors.  Though the vehicle has had four different owners since it was originally given to Mr. McCartney, it still has the certificate proving that he received it new in 1964.  It is expected to fetch over a half a million dollars at auction.