One Of A Kind Maserati Could Sell For $4 Million

A classic one-of-a-kind Maserati is going up for auction and it could sell for as much as $4 million! The 1971 Maserati Boomerang looks like something out of Back to the Future. That is probably because the Boomerang was designed by Giorgetto Giugiaro, who also designed the DeLorean. Giugiaro was an instrumental figure in car design and also made a mean noodle!

This concept sports car made its debut at the Turin Auto Show in 1971 and was ready to drive the next year. One thing that makes this car stand out is the large Maserati badge on the hood. It features a V8 engine with 300 horsepower and can go as fast as 186 miles per hour. This unique luxury car will go up for auction in September in London by Bonhams. 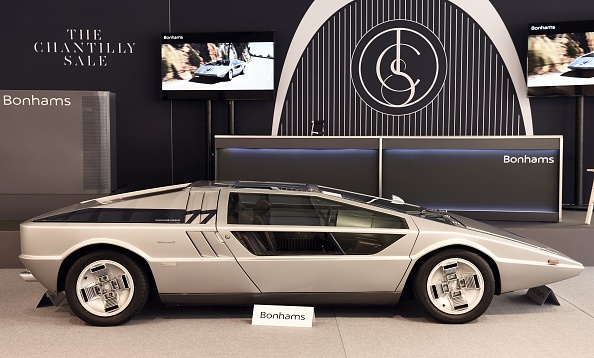 Bonhams' Philip Kantor said that the Boomerang "was the first car of its time to create such a strong, angular style statement. It's considered by many to be one of the most remarkable designs of the 20th century and the 'grandfather' to the Volkswagen Golf Mk 1." The Boomerang itself was based on the Maserati Bora, which Giugiaro also designed.

This stylish sports car has been shown off at Pebble Beach and Villa d'Este and also appeared in an ad campaign by Louis Vuitton. The Maserati Boomerang was produced by Italdesign and designed by Giugiaro who has been called the "best car designer of the 20th century". The Italian designer was also responsible for cars including the DeLorean DNC-12 and for models offered by Fiat, Ferrari, Jaguar, Alfa Romeo, and Aston Martin.

Giugiaro was noticed by Fiat's Technical Director while he was still in art school. He joined the carmaker's styling office and later became the manager of the Bertone Design Centre. Giorgetto's father and grandfather were well known figurative artists in Italy so design ran in the family. In 2000, Giugiaro was awarded with the title "Car Designer of the Century" by a panel of 120 journalists. He was inducted into the Automotive Hall of Fame in 2002 and also designed cameras for Nikon, computers for Apple, firearms, and the pasta shape "Marille." If only he could have known how much some of his cars would sell for!