By Paula Wilson on October 19, 2013 in Articles › Celebrity Cars

Nicki Minaj is both adored and reviled.  Most people fall into one camp or the other, and never the two shall meet.  Her rather meteoric rise was fueled by three immensely popular mixtapes put out between 2007 and 2009.  She released her debut album, "Pink Friday" in 2010.  It was massively successful, and spawned the quadruple Platinum track, "Super Bass".  She went on to become the first female artist to have 7 tracks on the Billboard 100 at the same time.  She followed that up with a second album that was even more successful than the first.  She is the first woman ever named to MTV's "Hottest MC List", and her albums have sold 5 million copies.  Based on her album sales, you'd think she was universally adored. You'd be wrong.  Her wild public persona, complete with fake accents, a candy-colored wardrobe, and an ever more ridiculous array of wigs, has made her an acquired taste.  She's as outlandish as Lady Gaga, but without the social consciousness part.  Her disastrous judging gig on the 12th season of "American Idol" didn't help matters any either.  In keeping with her over the top style, she recently purchased a Lamborghini Aventador Roadster… and promptly painted it pink. 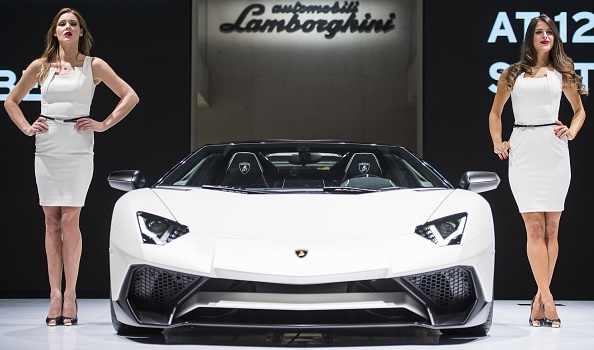 The Lamborghini Aventador runs on a 6.3 liter V12 engine, that produces 700 hp. The extremely powerful vehicle can go 0-60 miles per hour in a dizzying 2.9 seconds, and has a top speed of 217 miles per hour.  The Roadster hit the market in November of 2012 and the removable roof panels are made of carbon fiber.  The car also also has a redesigned engine cover and improved cabin airflow.  It sells for $441,600, which is probably what Nicki makes in digital downloads per day.