Nick Hogan's Car: Wise Decisions are Not His Forte

By Paula Wilson on November 9, 2012 in Articles › Celebrity Cars

When you are the child of a famous person or people, it is apparently quite difficult to know what to do or how to act.  70% of the time, being the child of a celebrity seems to equal drinking too much.  Doing far too many drugs.  Spending more money than you actually have regularly.  Or, basically making terribly bad decisions that land you on the cover of multiple dubious publications that can only be purchased while waiting in line to pay for groceries.  In other words, it usually equals a mess.  Nick Hogan falls into this 70%.  The son of wrestler and actor, "Hulk" Hogan, Nick Hogan first came to widespread attention appearing on his father's reality show, "Hogan Knows Best", and its spin-off, "Brooke Knows Best".  He started racing on the Formula Drift circuit in 2007, and received sponsorship from Dodge almost immediately.  They dropped him two months later, though he continued to race in two enhanced Dodge Vipers for much of 2007, and then in a Nissan 350Z.  He had a reputation for driving too fast around town, and was stopped repeatedly for speeding.  During the summer of 2007, it finally caught up with him, when he and members of his pit crew decided to race on their way to dinner at a steakhouse.  His car fishtailed and hit a tree.  Nick Hogan walked away, but his passenger's injuries were so severe that the man now requires 24/7 care for the rest of his life.  Nick Hogan served jail time for the accident.  After being released, he began training to follow in his father's footsteps on the wrestling circuit.  Nothing has come of that, however, so there is uncertainty as to how serious he is about pursuing the career.  When not doing, whatever it is he does with his time, Nick Hogan drives around town in a bright red Dodge Challenger. 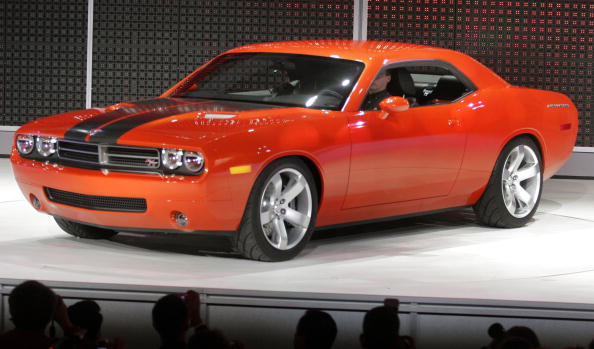 The third generation Dodge Challenger went into production in 2008.  It's a 2-door coupe with a 6.4 liter HEMI V8 engine and a styling reminiscent of the 1970 Dodge Challenger R/T.  The vehicle is rated at 470 horsepower, and can go from 0-60 in approximately 4 seconds.  The car can reach a top speed of 180 miles per hour, and with 20-inch wheels and chrome tips, it definitely harkens back to the muscle cars of the 70s.  Whether it is a wise choice of car for a man who has a penchant for driving too fast, and wrapping his vehicle around trees, only time will tell.