Miley Cyrus' Car: The Teen Star Gets a Grown-Up Car

By Paula Wilson on October 3, 2012 in Articles › Celebrity Cars

Unless you are a "Hannah Montana" fan, it is surprisingly easy to dislike Miley Cyrus.  It has nothing to do with her personally.  She's probably a nice person.  However, she has a lot of very nice things, and people keep giving her more of these very nice things, and it's all pretty annoying.  She started out as a tween Disney star, and has grown into a teenage entertainment juggernaut.  Though she has tarnished her "good girl" image of late, mostly by doing the usual stupid things teenagers do, her fan base is still clamoring for more Miley.  As long as they remain ready and willing to spend money on Ms. Cyrus, you can bet she will keep making content for them to buy, be it good or bad. 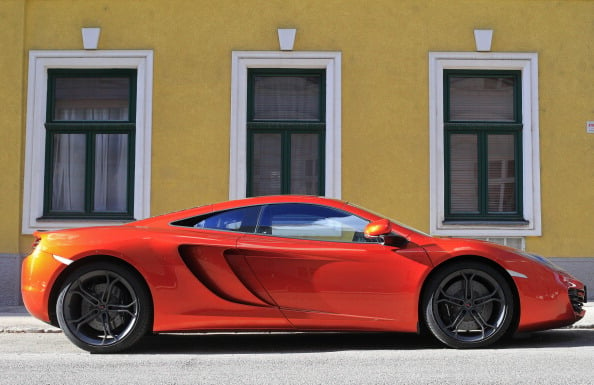 Recently she received another one of the aforementioned nice things.  In this case, it was a silver 2012 McLaren MP4-12C, valued at approximately $271,400.  The McLaren MP4-12C is a very nice British sportswear.  The 2-seat coupe has a 3.8 liter V8 twin-turbo engine.  The steering is based around the same technology used in Formula-1 race cars, and consequently, the inside rear wheel automatically breaks whenever you take a corner fast, to reduce understeer.  The car also features a 7-speed dual-clutch gearbox, and a carbon fiber composite chassis, making it a very light vehicle.  It weighs just over 3,000 pounds.  Vehicle horsepower maxes at 592 hp, and torque tops out at 600Nm between 3,000-7,000 rpm.  It can go as fast 205 mph, and can go from 0 to 60 in 3.3 seconds.  It's a great car.  Taken in combination with the 2012 Mercedes Benz SL550 Convertible, she got just a few months ago, Miley Cyrus is definitely sitting pretty.