Michael Madsen's Car: If You're Going to Get Pulled Over, It Might as Well Be In This Car

By Paula Wilson on September 13, 2012 in Articles › Celebrity Cars

Michael Madsen has enjoyed a very steady career of character roles and critically acclaimed work in independent projects, interspersed with more high profile performances in projects like "Reservoir Dogs", "Donnie Brasco", "Kill Bill", and "Sin City".  Though his acting ability has never been in question, his personal life has been somewhat less successful, and he has been arrested multiple times over the course of 2012 for misdemeanors that seem to be related to an alcohol addiction he is having trouble kicking. Most recently, he was arrested in Los Angeles for weaving through traffic erratically, in broad daylight, in the middle of the afternoon.  After being pulled over, and subsequently arrested for tanking his sobriety test, he took a breathalyzer test.  The result?  A whopping .20, not so good when the limit is .08.  Both he and his lawyer are insisting his behavior was due a to bad reaction to prescription medication, but this seems unlikely based on the breathalyzer.  While his arrest was terribly uncool, the car he was driving was not. 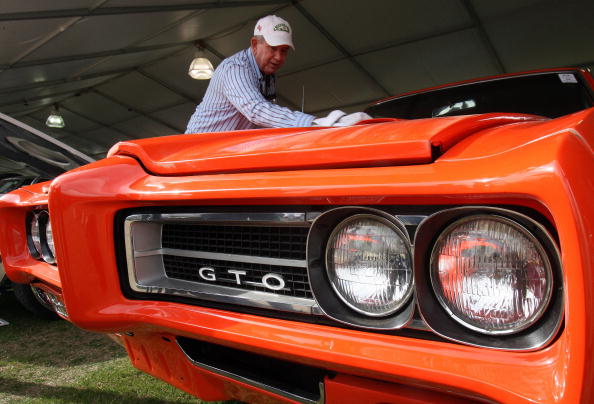 Michael Madsen's car is red Pontiac GTO.  Not only is it fire engine red, it also has massive flames painted on the sides.  It is somehow fitting that an actor who is widely associated with Quentin Tarantino's films, would drive a late 60s-early 70s "muscle" car.  Michael Madsen's GTO is a first generation GTO, and looks to be in pristine condition, so it likely cost him somewhere in the neighborhood of $80,000+.  The first generation Pontiac GTO's were all rear-wheel drive, and came with a variety of V8 engines.  The makeup of the car was actually in violation of General Motor's policy that limited maximum engine displacement in its A-body intermediate line to 330 cubic inches, but the GTO skirted the policy, and became one of Pontiac's signature vehicles.  Unfortunately for Mr. Madsen, driving such a signature vehicle makes you very easy to spot when you are weaving through traffic randomly.