McLaren Goes After Ferrari And Lamborghini's Throats With New 570S

The folks over at McLaren have just announced an awesome new line of sports cars. McLaren will call their new offering the Sports Series, and they are being touted as the company's answer to Lamborghini and Ferrari. The first in the line of the Sports Series is the McLaren 570S. The 570S will differ from famous McLaren models like the F1 and the P1 in a number of exciting ways. This is truly a supercar that every car enthusiast and billionaire collector will be drooling over.

McLaren appears to be aiming the 570S at a new group of owners (in other words Ferrari and Lambo owners). McLaren Automotive sold about 1,600 cars in 2014 and company executives are hoping the 570S as well as the forthcoming Sports Series can double their sales in the short term, and triple them by 2020. Their 675LT made its debut at the 2015 Geneva Motor Show in March with deliveries set to begin in July. 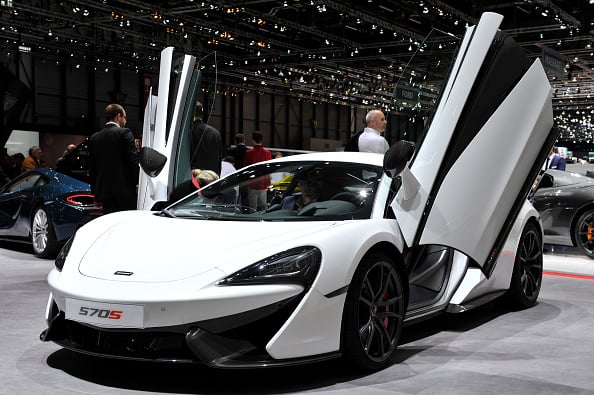 It is unclear exactly when you might be able to get your hands on the new 570S, but you can see it for the first time at the 2015 New York Auto Show in April at the Javits Center in Manhattan. Early estimates have the new McLaren priced at $180,000. Competitors for the 570S include the Porsche 911 Turbo, the Audi R8, and the Ferrari California, so it better live up to the hype!

Production will begin sometime in 2015 for this sports car. It will be a 2-door, 2-seat coupe body style with a rear mid-engine and rear-wheel drive. If you think this car is cool, it's only supposed to be the entry level model in their new lineup. The car was designed by McLaren's head designer, Frank Stephenson.

It will feature a M838TE 3.8 liter twin-turbo V8 engine which is mated to a 7-speed dual-clutch transmission. By all accounts, the 570S will have a top speed of 204 miles per hour with a 0 to 62 mph time of 3.2 seconds. There will be two variations of the 570S coupe: the entry level C and the more powerful S. McLaren plans to build about 2,500 cars per year, which would make this car the highest volume McLaren ever produced.

It is yet to be seen how popular the McLaren 570S will be but it looks and sounds like a great car. Will celebrity McLaren owners such as Rowan Atkinson, Nick Mason, Deadmau5, Floyd Mayweather, and Miley Cyrus purchase one? Or will it draw in celebrity owners of Lamborghinis and Ferraris?  I personally can't wait to see what McLaren rolls out next in the Sports Series. There is a McLaren dealership not too far from me and now I want to go see one of these bad boys!