Louis Tomlinson's Car: Nothing Says "Fame!" Like a 20 Year Old with a Porsche

Much like the boy-bands of the early to mid 90s, such as N'Sync, 98 Degrees, and the boy-band turned man-band, Take That, a studio brought the five members of One Direction together.  Their beginning was on a reality show, of all places, when the five members were thrown together after not making it through the solo male artist portion of "The X-Factor" auditions.  All cute, and barely legal, some studio executive decided to put them together, and turn them into a competition group.  The newly formed group went on to place 3rd in the competition, and have since signed with record labels in the UK and the US.  Their first album debuted at #1 in the US, and their 2013 world tour has already sold $15.7 million worth of tickets.  These boys are officially music superstars. 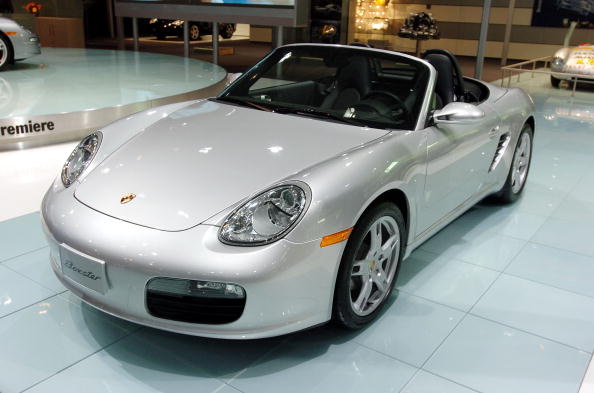 A strange thing happens to young men who suddenly have more money than most small countries.  They immediately start buying cars.  Some members of One Direction appear to have succumbed to this particular phenomenon.  Louis Tomlinson, the oldest member of the group, at age 20, seems to have been most affected.  He recently purchased both a black Porsche Boxster and an Aston Martin (naturally).  Mr. Tomlinson's Boxster is most likely a second generation 987, but he may have been able to crib one of the more powerful third generation models recently unveiled at the Geneva Motor Show.  The second generation Boxster comes with Dual Fuel Injection, the choice of a 7-speed dual clutch gearbox or a 6-speed manual gearbox, redesigned head and tail lights, larger air intakes, and the very cool Porsche Communication Management System with an interior touch-screen interface.  A new 987 currently costs somewhere between $45,000 and $65,000, so the young Mr. Tomlinson is clearly doing okay.