Lee Kun-Hee's Car: At Least Apple Won't Be Coming After Him About This Theft

Ferrari has produced some of the most gorgeous cars to ever hit the road (or sit in a showroom or garage).  Though excellent design, quality of craftsmanship, and unparalleled handling account for most of the brand's popularity, Ferrari has also made a point of releasing limited numbers of many of their best vehicles.  Consequently, each new design is almost instantly in high-demand, and the brand's mystique, not to mention its prices, continue to increase.  One such example of this is a Ferrari GT class racecar known as the 330 LMB.  Four were manufactured and released in 1963, and though they didn't all see a racetrack, they have seen multiple car auctions and owners.  Since there are only four, it has been relatively easy to keep track of them.  They are each worth $15 million.  The fact that they were almost the final racecars produced by Maranello with front engines accounts for the sizable price tag.  However, the 330 LMB owned by Lee Kun-Hee, the Chairman of Samsung, may not have the best sales history.  In fact, it appears to have been stolen. 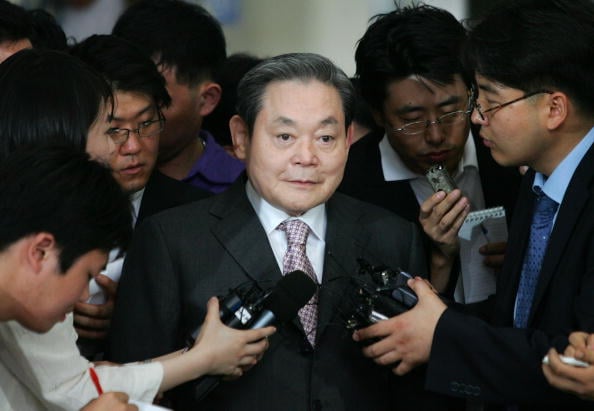 According to the good folks over at Jalopnik, Samsung's Chairman, Lee Kun-Hee, had nothing to do with the theft, but the alleged original owner, Ivars Blumenau, from Georgia, does have a fairly strong case for proving he is actually the rightful owner.  Mr. Blumenau purchased the car in question, the only one of the four vehicles with three carburetors, in 1974.  He then left it with Georgia-based mechanic and dealer, Donald Fong.  In March of 1977, it went missing.  A report was filed about the disappearance of the car, but Mr. Fong was listed as the owner.  Another man, a Mr. Brusini, who worked for Mr. Fong, may have sold the car to another person in Chicago.  Mr. Brusini disappeared long ago, and Mr. Fong subsequently went to jail for fraud unrelated to Mr. Blumenau's case.  The car has passed through multiple owners at this point, and now belongs to the most powerful businessman in South Korea.  Mr. Blumenau has been traveling around, hiring lawyers, and working with law enforcement officials, in attempt to prove that the title he has in his hands, and has had since the early 70s, makes him the owner of the car.  Now that he is going up against one of the richest men in the world, it seems like Mr. Blumenau's case will be even harder to win.