Kourtney Kardashian's Car: The Elder Kardashian May Not Be As Famous, But She Drives a Great Car

By Paula Wilson on January 21, 2013 in Articles › Celebrity Cars

You have to feel a little bad for Kourtney Kardashian.  Though she has enjoyed multiple successful spin-off reality shows about her day-to-day existence, appears to be in a (relatively) stable relationship, and keeps popping out healthy children, she is still not quite as famous as her younger siblings Kim and Khloe.  No matter how hard Kourtney tries, she just can't quite seem to get as many endorsement deals, invitations to events, or free swag as her sisters.  Life is unfair.  Fortunately, she has family to fall back on, and she has launched multiple clothing lines, a line of sunless tanning lotion, and a line of jewelry, with her sisters and mother.  She also serves as the face of a skincare line and a diet supplement.  She even made an ill-fated attempted at acting, appearing in a guest starring role on "One Live to Live" in early 2011.  Her performance was almost universally panned.  When she is not running off to endorse products, take care of her kids, or shoot another reality television episode, she drives around town in a Mercedes-Benz S-Class.  (Her sisters seem to prefer cars of the Rolls-Royce variety.) 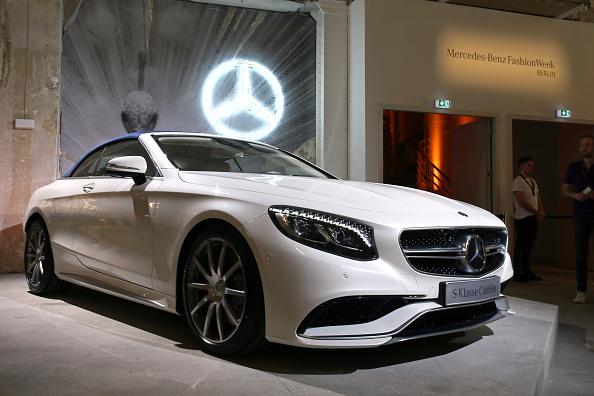 Kourtney Kardashian's car is a black Mercedes-Benz S-Class.  The luxury sedan was launched in the mid-1950s, and the current generation went into production in 2005, and has gone through various upgrades over the course of the last eight years.  The car has a range of engine options from a 2.1 liter diesel with 204 hp, to a 6.2 liter AMG 525 hp V8 engine.  There are also V6, V12, and hybrid motor options.  It comes with automatic 7-speed transmission, and depending on the model, can go 0-60 from 3.6 seconds to 5.4 seconds.  The car comes with a wide range of luxury features, including Infrared Night View Assist, LED running lights, and the Brake Assist Plus system.  The vehicle can cost upwards of $200,000, which means that life has not been so unfair to the elder Kardashian, after all.