By Paula Wilson on January 10, 2013 in Articles › Celebrity Cars

Kim Kardashian is currently making headlines, and causing paparazzi whiplash, as the new house-hunting, baby-having girlfriend to unpredictable, albeit talented, rap artist/producer, Kanye West.  After blazing her way into the collective conscious of the American public via the leaking of a sex tape, Kim Kardashian and her family established themselves as the the wealthy family to watch, quite literally.  The stars of their own reality television show, "Keeping Up with the Kardashians", the various members of the Kardashian clan turned doing next to nothing while looking pretty, into ratings gold and massive paychecks.  Their show launched in 2007, and since then, it has spawned three spin-offs.  In 2010, Kim Kardashian earned $6 million from a combination of paid endorsements, her own clothing and fragrance lines, and her reality television salary.  Though many people complain about her and her seeming lack of any functional skills, her popularity has not yet waned, and it will be interesting to see if her relationship, not to mention her expanding waistline, will dim her star at all.  As she prepares to move into a new home with her "baby daddy", she has sold many of her Miami-based possessions, and shipped her Rolls-Royce to Los Angeles.  However, on a recent trip to Miami, she was seen driving around in a vehicle that was clearly not from any of the airport rental dealerships. 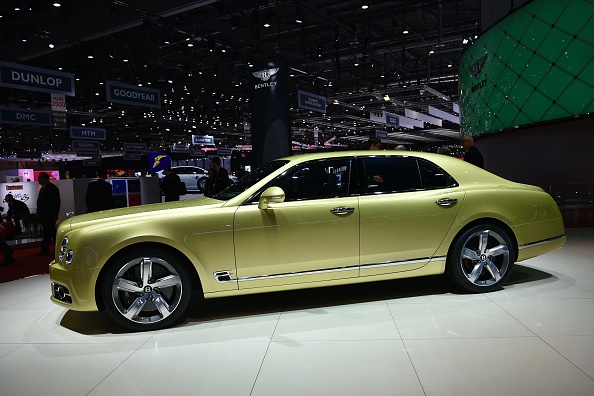 Kim Kardashian's car (at least in Miami), is a Bentley Mulsanne.  The current version of the Bentley Mulsanne went into production in 2010.  The car was named in reference to Bentley's long and successful history with the 24 Hours of Le Mans race, which includes the Mulsanne Straight.  A four-door sedan, the Bentley Mulsanne is powered by a 6.75 liter twin turbo L Series V8 engine.  The vehicle takes twelve weeks to make, and is the first car completely constructed by Bentley Motors since the 1930s.  While the exterior design harkens back to old world luxury, the interior of the car exhibits the latest technology, including LCD screens hooked up to a Mac Mini, iPads in fold out trays, Bluetooth keyboards, a Naim audio system, wifi, iPod docking stations, and the ability to customize the interior and exterior colors, veneers, and fabrications.  All of that luxury costs $300,000, of course, but for Kim Kardashian, $300,000 is a week of television appearances, and a photo shoot, so she's probably not too worried.