Kelly Rowland's Car: The Destiny's Child Alum Drives Into the Future in a Jaguar F-Type

By Paula Wilson on September 7, 2013 in Articles › Celebrity Cars

Being one third of one of the most popular girl-groups of all time is a tough job.  This is especially true when the group members go their separate ways, and one member blows up into a super, duper, ridiculo-mega star.  Such is the story of the members of the wildly successful trio, Destiny's Child.  Beyonce Knowles and Kelly Rowland were members of the original Destiny's Child quartet.  The quartet went through many iterations.  (Their history is rather fraught with drama actually.)  Eventually, the the group settled down to three members, Beyonce, Kelly, and Michelle Williams.  When they decided to go on hiatus to pursue solo careers, there was a collective wail from pop music fans worldwide.  Kelly scored the first hit right out of the gate, collaborating with Nelly on the Grammy-winning single, "Dilemma".  Michelle shifted her focus to gospel music and quickly began burning up the charts there.  Then Beyonce released her first solo album, and all hell broke loose.  Her success far eclipsed her former group mates, and though both continued to be quite successful, neither have achieved the level of fame that Beyonce has enjoyed.  Kelly Rowland has fared better overseas than in the US, and has appeared on a variety of television shows in Europe and toured quite successfully.  Recently, she has begun to re-emerge stateside, and her most visible project yet is a judging gig on the American version of the "X-Factor".  In preparation for the show's premiere in late September, she has been appearing everywhere, looking stylish, sexy, and not the least bit worried about "what's her name", a.k.a. Beyonce.  Most recently, she stepped out in a brand new Jaguar F-Type. 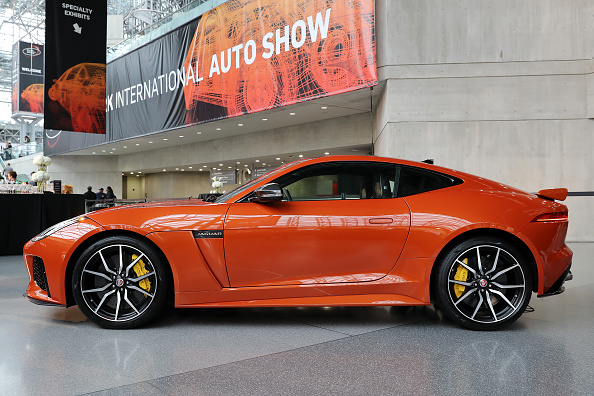 The Jaguar F-Type is a sports coupe with two seats that went into production in 2013.  Built on a shorter version of Jaguar's XK platform, the two-door roadster runs on a 3.0 liter supercharged V6 engine that produces 340 hp.  The car can go 0-60 in 5.1 seconds and tops out at 161 miles per hour.  The F-Type is constructed of an all-aluminum chassis, and features a leather interior, bi-xenon headlights, LED running lights, a retractable rear wing spoiler, retractable door handles, and a Meridian sound system which utilizes ten to twelve speakers, depending on the model.  The car currently sells for a healthy $70,000.  It's not the most you'll pay for a Jaguar by a long shot, but it's no small change, either.