By Paula Wilson on November 15, 2012 in Articles › Celebrity Cars

Katie Price began modeling as a child, and was hired to model for a children's clothing line when she was 13.  Unfortunately, the photographer insisted that she model in her underwear, and it turned out he was actually a convicted pedophile.  It was not a particularly auspicious way to begin her professional career.  After leaving school at age 16, where she was a champion swimmer, she relaunched her modeling career.  This time she was more successful, appearing in multiple British publications, including a high-profile spread on Page Three, the topless glamour model section of "The Sun" tabloid.  Beginning in 1996, she became a fixture on Page Three and in various magazines, such as FHM, Nuts, Maxim, British Playboy, and Loaded.  She has since also appeared on the cover of Playboy in the US, and in Vogue and Esquire.  She has amassed a large fortune writing columns, releasing books about her life, appearing on various reality shows, hosting programs, launching clothing and haircare lines, and continuing to model.  She has had two heavily publicized relationships, one with British recording artist, Peter Andre, and another with MMA fighter, Alex Reid.  She has three children, and splits her time between London and Los Angeles.  In order to go from job to job, the surgically enhanced mass media star drives a Pink Ranger Rover. 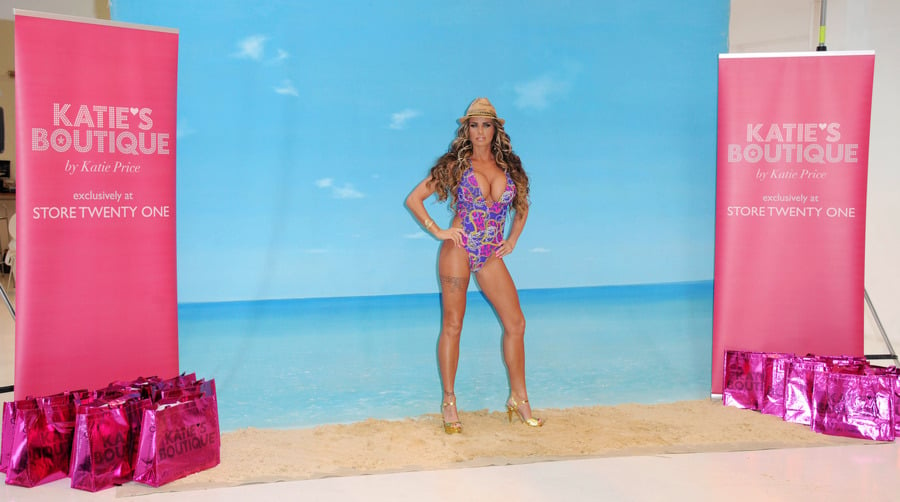 Katie Price's Range Rover is a custom shade of pink that sits somewhere between Bazooka Bubblegum and Pepto-Bismol.  The first Range Rovers went to market in 1970, produced by Land Rover.  The cars are now in their third generation, and have become increasingly synonymous with luxury.  The Range Rover L322 runs on a 4.4 liter Ford TD V8 engine and comes with 8-speed automatic transmission.  Portions of the vehicle's design are is based on the BMW 7 Series, and the care features a Bluetooth System, a Navigation system, CD and MP3 players, a leather interior, xenon headlamps, automatic climate control, and rain-sensing wipers.  The combination of high-end features and rugged construction make the car both comfortable and functional.  This makes it the perfect car for a celebrity who made her name with surgically enhanced breasts, and then parlayed one tabloid spread into a $40 million fortune.