By Paula Wilson on January 31, 2013 in Articles › Celebrity Cars

Kat Von D has managed to strike just the right balance between cool, tough, and sexy.  A popular tattoo artist turned model and reality television star, Kat Von D, also known as Katherine von Drachenberg, parlayed her tattoo work into a burgeoning entertainment and clothing empire.  After appearing on the reality show "Miami Ink", she was offered her own program, and "LA Ink", was born.  The series ran for four seasons, at which point Ms. Von D, decided to walk away from the show in order to focus on other pursuits.  These other ventures included founding her own tattoo festival, the MusInk Tattoo Convention and Music Festival in Southern California; launching a make-up line and a fragrance line with Sephora; writing two best-selling books about tattoo art and her creative process; opening an art gallery, called Wonderland Gallery, next to her tattoo parlor, High Voltage Tattoo; and launching a clothing line that has recently gone global.  The young woman, who dropped out of high school at age 16 to focus on building a tattoo art career, has done quite well for herself.  She has also amassed a sizable amount of money, which has meant that she can buy nice things, like cars.  She is most often seen driving her black Bentley around southern California.  However, she recently backed the vehicle into the side of a house, so it's out of commission for a bit.  Currently, she is relying on her fiance, Deadmaus5 (a.k.a. Joel Zimmerman) for transportation, and has been seen tooling around town in his Porsche Carrera S. 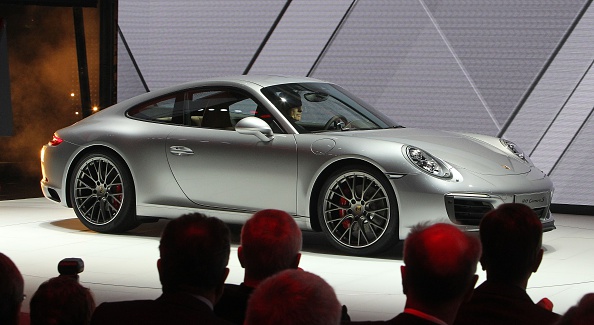 The Porsche Carrera S was rolled out by Porsche during the summer of 2011.  The car runs on a 400 hp 3.8 liter engine, and is built on a longer, wider platform than previous Porsche models.  It's the first platform redesign since the Porsche 911.  The car is constructed of more aluminum than any of the previous Porsche vehicles, so it is larger, but still lighter than older cars.  The Carrera S can go from 0-60 mph in 4.3 seconds, and with the optional PDK transmission, that time decreases to 3.9 seconds.  The car is also the first to come with a 7-Speed Manual Transmission.  Additionally, both the fuel economy, and handling, have been noticeably improved.  In other words, the Porsche Carrera S is a seriously nice car, and hopefully, Ms. Von D will be able to refrain from driving her man's car into any inanimate objects.