By Joseph Gibson on June 6, 2012 in Articles › Celebrity Cars

It makes sense that Kanye West's car (or, more accurately, cars), would reflect his wealth and flashy lifestyle. After all, we're talking about one of the inventors of so-called "luxury rap" in his collaborative album with fellow rapper Jay-Z, Watch the Throne. Today we have Kanye rolling in luxury worthy of Throne, in a Mercedes-Benz SLR Stirling Moss.

The Stirling Moss undoubtedly earns the title of "luxury car." With a base price of just over $1 million, it exists as a highly limited edition. So limited that only 75 Stirling Moss cars were ever produced. Designed as a kind of hybrid between a luxury automobile and a car built for speed, the Stirling Moss has no roof and no windshield. The reason for this is so it can reach its top speed of 220 miles per hour with maximum efficiency, in much the same way that cars built for the express purpose of racing can. Another feature that differentiates it from the regular Mercedes-Benz SLR is its much lighter weight, coming in at 440 pounds lighter. 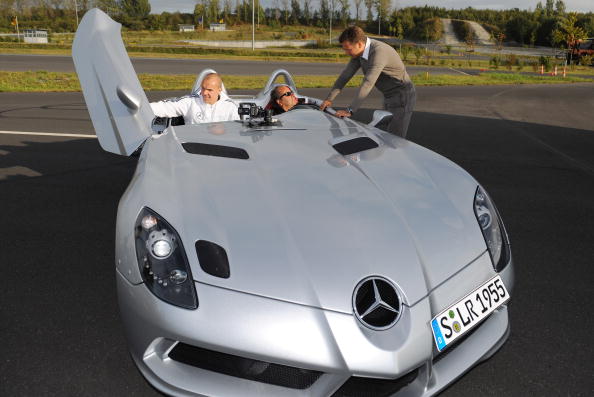 As for Kanye, he has more reasons than ever for traveling in style. His Watch the Throne tour continues to earn big money at the box office, and despite his controversial public statements he remains an artist with millions of devoted fans who pay attention to not just his official projects but his off-the-cuff public statements as well. And with the recent news that Kanye and Jay-Z will be releasing a sequel to Watch the Throne, the Kanye West success story shows no signs of stopping any time soon.

So, at this point, the question goes from being "how did Kanye afford a $1.05 million car," to "how come he isn't driving something nicer?" Well, I guess we all try to save money where we can, even if it means driving in a car with no roof or windshield!