Julianne Hough: Continuing Her Entertainment Assault in a New Car

Julianne Hough has managed to do quite a lot in a very short amount of time.  A ballroom dancer since she was a child, she began dancing competitively when she was 10, and eventually moved to London to study dance full-time.  She went on to become the only American to ever win both the Junior World Latin Championship and the International Latin Youth Championship.  She is also the youngest dancer to have ever won both.  After returning to the United States, she began working on the show, "Dancing with the Stars", alongside her brother, Derek Hough.  She won Seasons Four and Five, and then decided to shift her focus after Season Eight.  She released a number one country album in the spring of 2008, and a holiday album a few months later.  Both albums have continued to sell well.  She then shifted her focus to acting, beginning with a small role in the film "Burlesque".  She followed that up with a starring role in the remake of "Footloose".  Since then she has co-starred in the film version of the Broadway musical, "Rock of Ages", and in the Nicholas Sparks drama, "Safe Haven".  When she is not dancing, singing, acting, or getting Emmy nominations for her choreography, she drives around town in a brand new Mercedes-Benz G63.

The Mercedes-Benz G 63 is part of the G-Class series, a series of sport utility vehicles that originally went into production in the late 70s.  Initially designed as a military vehicle, the car was retooled into a consumer-friendly version, and has remained popular for many years.  The current G 63 model runs on a V8 twin turbo engine that produces 537 hp.  It has 7-speed automatic transmission, and 9.5×20 inch alloy wheels.  The G 63 also comes with an ECO start/stop function, LED running lights, blind-spot monitoring, adaptive cruise control, better suspension than in previous models, and multiple aesthetic improvements to the exterior.  The vehicle currently sells for around $134,000, so Ms. Hough's pursuit of triple-threat stardom is clearly going well. 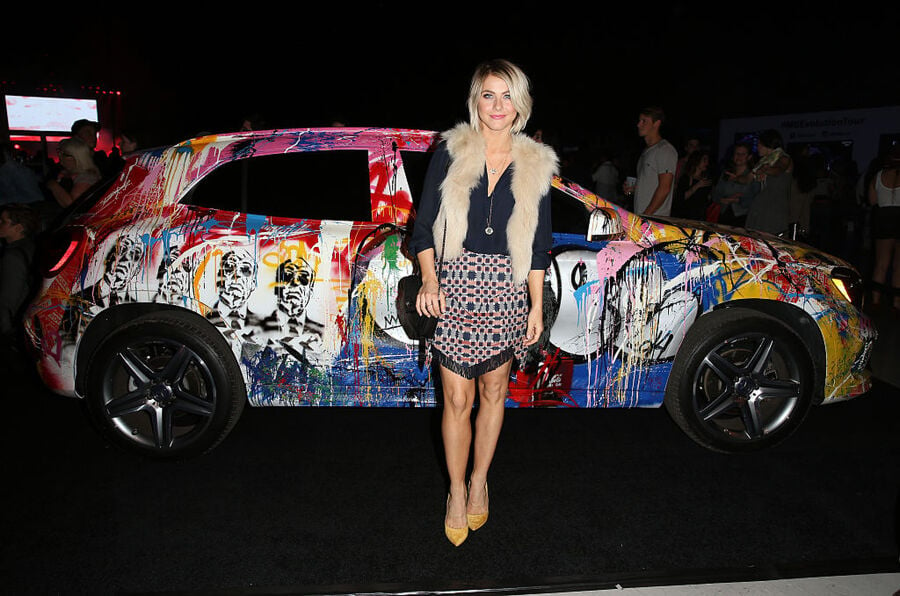 Chelsea Lauren/Getty Images
Did we make a mistake?
Submit a correction suggestion and help us fix it!
Submit a Correction