Jessica Simpson is buying things, selling things, giving birth, and basically running around like a chicken with her head cut off of late.  The singer, actress, fashion designer is currently expecting her second child.  She gave birth to her first child, with husband Eric Johnson in May of 2012.  She announced her second pregnancy in December of 2012.  In between making new family members, she has appeared as the spokesperson for Weight Watchers, served as a mentor on the reality competition series, "Fashion Star", and shot the pilot for a new sitcom for NBC.  The woman should take a break.  After launching her career as a singer in 1999, with the Platinum certified single, "I Wanna Love You Forever", Ms. Simpson began a period of multimedia domination.  Multiple successful albums followed, along with an MTV reality series, "Newlyweds", which followed the early years of her marriage to fellow pop star, Nick Lachey.  The show ended when the marriage ended.  She also launched an acting career, appearing in such movies as "The Dukes of Hazzard", "Employee of the Month", and "Blonde Ambition".  In 2004, she launched a line of edible perfume and cosmetics.  She then created the "Jessica Simpson Collection", a line of handbags and shoes she designed herself.  She launched an online beauty products site soon after, and then an intimates line.  Since 2008, she has been churning out fragrances known as the "Fancy" line.  Who knows where the woman gets her energy.  We do know how she gets around town, however.  She drives around in a Mercedes-Benz ML.

The Mercedes-Benz ML is the most recent generation of Mercedes-Benz's mid-size crossover SUVs.  This current generation has more legroom than previous versions and adjustable back rests in the rear seats.  Depending on the model, the car runs on a 3.5 L V6 engine, a 4.6 L V8 engine, or a 5.5 L V8 engine.  It comes with a 7G-Tronic Plus seven-speed automatic transmission, as can have a host of electronic features including Adaptive Cruise Control, adjustable-height air suspension, and an Active Lane Departure Warning System.  The vehicle can go 0-60 miles per hour in 4.8 seconds, and cost anywhere from $50,000 to $100,000 depending on the optional features.  This is the third SUV that Jessica and her family have purchased of late, so it's probably safe to say that they are planning on having a few more children. 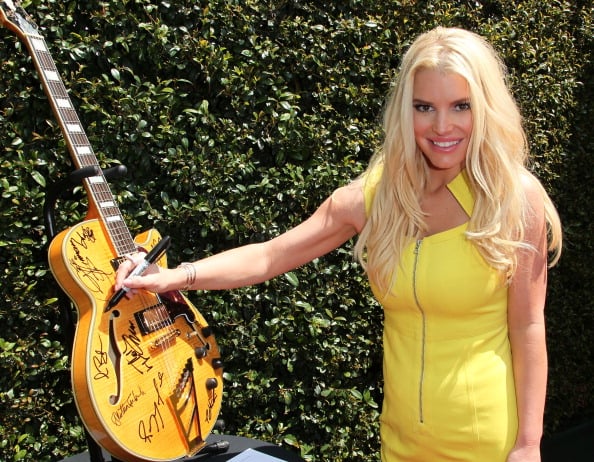 David Buchan/Getty Images
Did we make a mistake?
Submit a correction suggestion and help us fix it!
Submit a Correction