By Joseph Gibson on June 3, 2021 in Articles › Celebrity Cars

If you closed your eyes and tried to imagine a couple who would own the most expensive car in the world, it might not take you too long to land on JAY-Z and Beyoncé. They're two of the most commercially successful artists in music today, with a combined net worth of nearly $2 billion, so it shouldn't come as a surprise that the couple are rumored to be the owners of a new Rolls-Royce. And not just any Rolls-Royce. A custom-built Rolls called the "Boat Tail" that currently holds the distinction of being the world's most expensive (new) car.

Promotional materials from Rolls-Royce itself state:

"A double refrigerator houses the clients' favourite vintages of Armand de Brignac champagne. Bottles can be rapidly cooled to precisely six degrees – the optimum serving temperature of the preferred vintage."

Fans of Jay-Z are likely aware that the rapper bought Armand de Brignac champagne in 2014 and still owns half of the brand today. 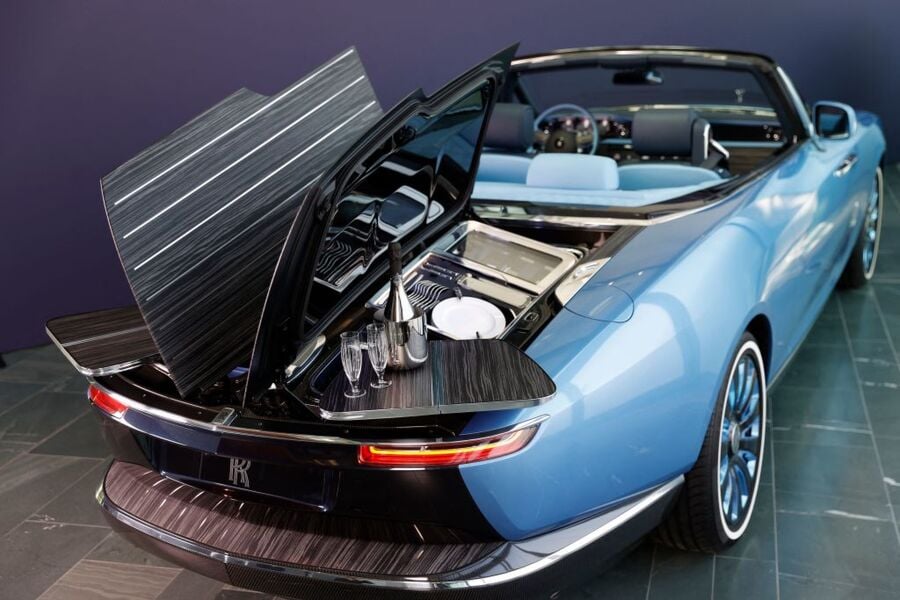 The car itself is almost as impressive as you'd expect a $28 million ride to be, described by Rolls-Royce as being "[e]nvisioned by extraordinary clients and realized by the master artisans of Coachbuild, this singular imagining honours the owners' lifelong reverence for life at sea."

Notable features of the car include a detachable carbon fiber roof, and in the back a wooden deck that can open up to reveal the aforementioned champagne cooler, a complete silver cutlery set, a parasol, two stools, and two cocktail tables.

Another clue to the car's ownership might be found in the way Rolls-Royce describes the car's color:

"The clients' favourite hue: an oceanic blue infused with shimmering crystals. The complex colour is subtle in shadow and vibrant in light. Its smooth edges were achieved by delicately running a finger over the definitive body line before the paint set."

JAY-Z and Beyoncé probably aren't the only mega-rich married couple who love Armand de Brignac and the color blue but they do seem like significant details when combined with the unnamed source that identifies them as the clients who commissioned this custom job.