Jay Leno Car Collection: What's The Value? How Did Jay Get Started?

By Joseph Gibson on September 23, 2018 in Articles › Celebrity Cars

Jay Leno is arguably more famous as a stand-up comic and former Tonight Show host than he is as a car collector, but these days, it might be neck and neck. As such, his famous collection of automobiles is definitely worthy of discussion, especially for those curious about its estimated total value.

It's part of the Leno lore that before he made it big as a comedian in Los Angeles, he worked a day job as a car salesman while working on his act by night. Even before that, the young Leno had a passion for automobiles, and before he even earned enough money to become a car collector he purchased his first one for just $350. Earlier this year, he told CNBC the tale:

"I bought a '34 Ford pickup truck and it didn't run and my dad said, 'You've got two years before you get your license, so get busy working on it. I learned how to fix it and make it run."

Technically speaking, that was the beginning of what is now a world-famous collection of cars, totaling some 170 cars and over a hundred motorcycles. As for its estimated value, that can be anywhere from $50 million to $100 million. Among the crown jewels of his collection, at least from the standpoint of financial value, he reportedly has several cars that are worth a million bucks or more all on their own. There's a 2014 McLaren P1 said to be worth about $1.35 million, but the other most valuable pieces of the collection are classics. Classics like a $1.8 million 1955 Mercedes 300SL Gullwing Coupe, which is joined by priceless one-of-a-kind pieces like his 2006 GM EcoJet. 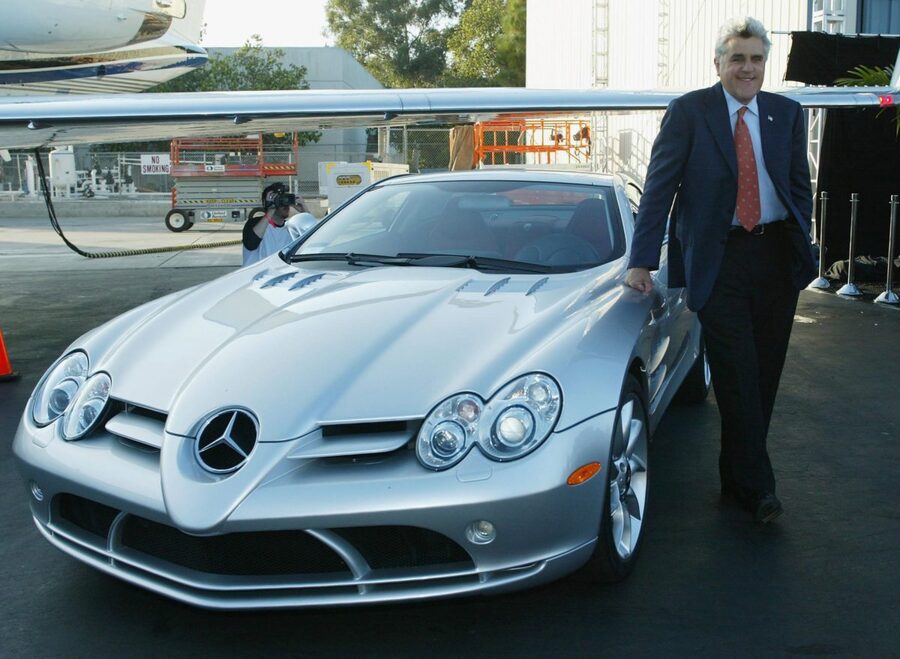 Part of Leno's car collection is kept in a Batcave-like structure underneath his home (he reportedly has an elevator there straight from his bedroom), but the bulk of it is at a separate facility in Burbank. And the Batcave comparison goes even deeper, since one of the other highlights of his collection is the Chevrolet V8 Batman Tumbler, as seen in the Christopher Nolan Batman films! Back in 2010, his collection was used as the basis for many of the classic car designs in the 1940s-set video game LA Noire.

Leno's love of novelty repeatedly comes through in his car collection, as in the alien-like Aptera Electric Car or Ariel Atom. And unlike many car collectors, Leno enjoys driving his automobiles as well, often seen tooling down the street in some unusual vehicle or another.

Today, with his Tonight Show days behind him, Leno's car collection is a bigger part of his public persona than ever. He hosts a web/television series for NBC called Jay Leno's Garage where he does car and motorcycle reviews and shows off some of the most interesting and prized pieces in his collection.