By Paula Wilson on August 8, 2013 in Articles › Celebrity Cars

Ice-T, also known as Tracy Marrow, began his music career in high school, performing in a band made up of classmates.  The experience was positive enough that he decided to pursue a career in music.  After serving in the US Army for four years, he launched his rap career.  He was signed by Sire Records in the late 80s, and immediately garnered national attention when his debut album became the first hip-hop album to require a sticker warning of explicit content.  From there, he went on to release multiple albums, and to co-found a heavy metal band called, Body Count.  Not content to simply rap his way through life, he began pursuing an on-camera career, in earnest, in the early 90s.  In addition to releasing such, now classic hip-hop albums as, "Power", "The Iceberg/Freedom of Speech… Just Watch What You Say", "and "O.G. Original Gangster", he also began building a name for himself in Hollywood, with roles in such projects as, "New Jack City", "Richochet", "Trespass", "Surviving the Game", and "Tank Girl".  Fast-forward to 2013, and both his acting and music careers are still going well.  He has been co-starring on "Law & Order: Special Victims Unit" since 2000, and is the subject of the popular E! reality series, "Ice Loves Coco".  He released his last album in 2009, but currently has a new project in the works.  Unlike many of his hip-hop colleagues, he has a tendency to be rather chill and unflashy.  Even his choice of car speaks to more maturity.  He drives an Aston Martin V8 Vantage Roadster.

The Aston Martin V8 Vantage Roadster is a handmade car.  It became available in 2006, and runs on a 32 valve, 4735 CC V8 engine, which produces 420 bhp.  The car can accelerate from 0-60 in 4.7 seconds, and has a top speed of 180 miles per hour.  It takes eighteen seconds to raise and lower the roof, and it can be moved automatically in speeds of up to 30 miles per hour.  The car also features a full-leather interior, a 160 W Aston Martin audio system with iPod and USB connectors, seats that can be adjusted electronically, automatic temperature control, and rear parking sensors.  Ice-T had his particular Aston Martin customized subtly.  His Vantage Roadster features silver wheels, and a customized carbon fiber rear wing.  However, his extra car "bling" does not detract from the natural beauty of the vehicle.  Chris Brown could learn a thing or to from Ice-T regarding how to properly customize a car. 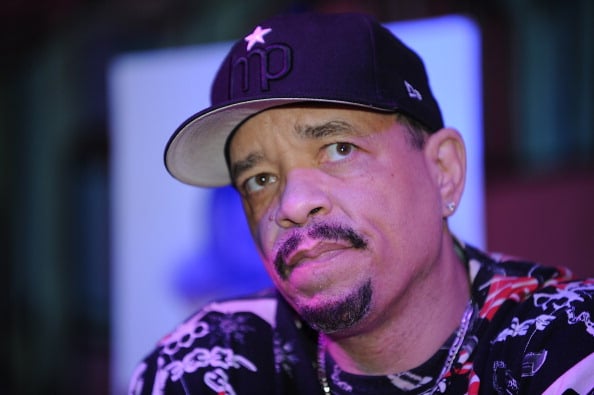