Ian Poulter's Car: A Custom Made Ferrari for a Funky Golfer

The game of golf does not exactly inspire images of rowdy behavior, outlandish clothing, or overblown braggadocio.  However, golfer Ian Poulter has earned a reputation, legions of fans, and multiple fines, for just such acts.  A very good golfer, who has one PGA tour win, and eleven European tour wins under his belt, Ian Poulter has been ranked as high as fifth in the world.  He is known for wearing everything from football jerseys, to bright pants with trophies on them during matches.  Much of his clothing choices are inspired by clothes from Dorothy Perkins, a women's clothing chain where his mother was once employed. 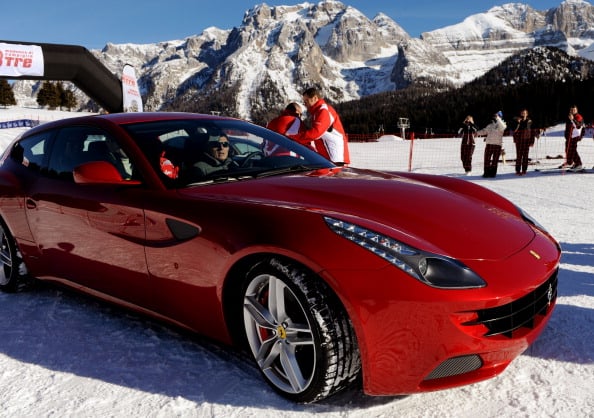 With all of his confident "trash-talking" about other golfers and his eye-catching clothing choices, it would stand to reason that he would have a car to match.  This week, he was gifted with a tailor-made Ferrari FF at Monterey Car Week.  The custom Ferrari was created with a personalized "Sabbia" triple-layer livery.  It also sports leather accents from Poltrona Frau, the famous Italian furniture makers, and one of the tartan designs from Mr. Poulter's own Ian Poulter Design (IJP) collection.  Mr. Poulter currently makes his home in the US, and this was the first tailor-made Ferrari ever delivered to the United States. Amedeo Felisa, the CEO of Ferrari, handed him the keys during a special ceremony.  An avid car collector, whose dogs are named Enzo and Bentley, Mr. Poulter also owns a Ford GT, a Bentley Continental GT, and a Ferrari California.  The Ferrari FF, or Ferrari Four, is the first four-wheel drive, four-door vehicle produced by Ferrari, and was unveiled in March of 2011.  It is the fastest four-door vehicle in the world, and can go from 0 to 100 kilometers per hour (62 mph) in 3.7 seconds.  Ferrari produced 800 of the 4,145-pound cars during the FF's first year.  The gift to Mr. Poulter is a shot of publicity, and may make this addition to Ferrari's Grand tourer class vehicles, one of their most popular.