By B. George Young on November 9, 2015 in Articles › Celebrity Cars

The multi-million dollar private jet industry is on the rise. Private and corporate customers are spending more than ever before to be able to travel the skies in the ultimate of luxury planes. Each year in Geneva, the EBACE aeroplane market takes place and it is the largest private jet show in Europe. This year's gem was a $51 million private jet called, the Embraer Lineage 1000E, which features an on-board dishwasher and a shower.

The jet was made for Simon Wheatley from the UK broker, Air Partner. Wheatley will use the jet as a charter for businesses and wealthy individuals who want to travel in luxury. The approximate cost to use this jet will be $12,500 per hour! 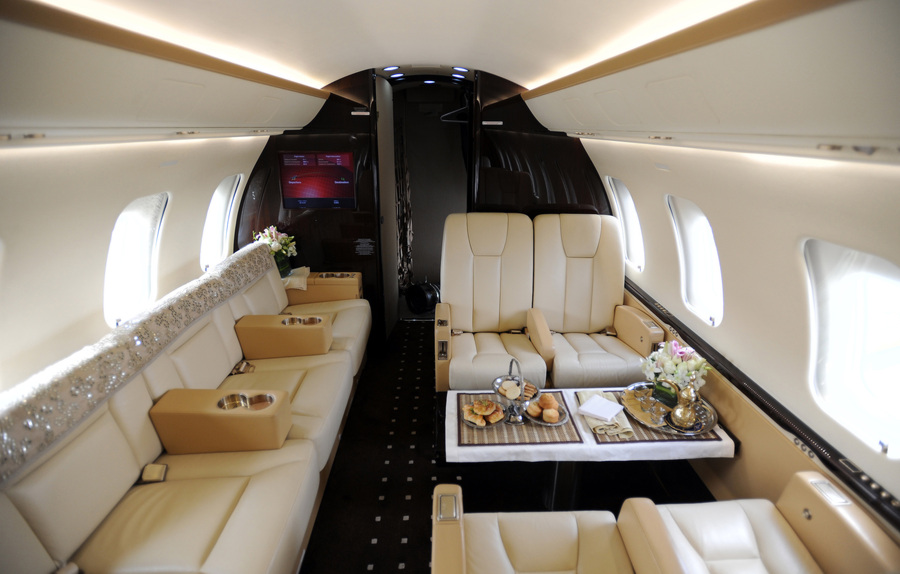 So what kind of luxury can someone get for this ridiculous price? To start, the central zone of the jet features the finest wool carpets and white leather benches. The living area also has five televisions, four Blu-ray players, surround sound speakers, iPod docks, Wi-Fi, and a satellite telephone. Wheatley says that you "can take mountains of luggage" and that this plane is "ideal for shopping trips to Europe from the Middle East."

The cabin is divided into five areas, including the master bedroom, which has a queen sized bed and a walk-in shower. For other guests needing to use the restroom there are also two lavatories up front. This private jet comes with two pilots as well as two stewards. If a long journey is being taken, an additional pilot can be added.

The Embraer Lineage 1000E is the longest VIP jet that is permitted to land at small airports, coming in at over 84 feet. It utilizes General Electric engines and Honeywell technology and is said to be quite fuel-efficient. The jet's kitchen comes with both a convection and microwave oven and also features an espresso maker and a top of the line dishwasher that costs $75,000. The plane's seats can be swiveled so that four passengers can dine together on laminated wooden tables. Vacuum packed gourmet food and fine wine are also available.

A typical plane of this size can fit about 90 passengers, but this jet accommodates just 19, as a result of its luxurious features. The seats can be converted to flat beds, which can become double beds when joined together. This super-expensive jet has a range of 5,300 miles and a top speed of 543 miles per hour. A quick one-and-a-half-hour trip from London to Geneva will set you back almost $50,000, while a long, seven-and-and-half-hour trip from London to Dubai will cost an astonishing $188,000! With a 9% increase in demand for VIP airliners from 2014 to 2015, Wheatley's $50 million plus investment may actually pay off sooner, rather than later.