Harry Metcalfe's Car: The Evo Founder Makes a Rare Sale of an Even Rarer Car

By Paula Wilson on January 9, 2013 in Articles › Celebrity Cars

For British car aficionados, Evo is required reading.  The British magazine devoted to performance cars, Evo has featured excellent articles about high performance vehicles since 1998.  Its end of the year "Car of the Year" issue is popular all over the world, and there are international editions of the magazine in 12 countries.  Evo's founder, Harry Metcalfe, has one of the most drool-worthy garages in the world, with an amazing collection of Ferrari's.  Many of his vehicles have been featured in various editions of Evo, including his Pagani Zonda C 12 S.  Just over 200 of the cars were ever manufactured, and his was the first official press car, so it is highly pedigreed.  Despite his well-known adoration for the vehicle (and its prominence in the pages of Evo), Mr. Metcalfe chose to sell it.  He recently reported via his Twitter account, that the nearly priceless car had been purchased by an Evo reader. 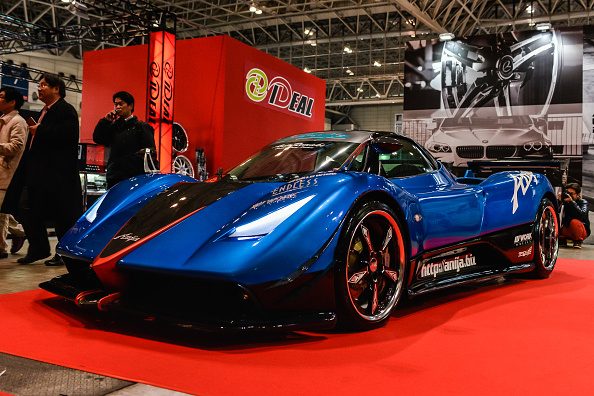 The Pagani Zonda was first launched in 1999, and production ended in 2011, though three special editions were released in 2012.  Of the 206 Zondas manufactured, only eighteen were manufactured as part of the C12 S 7.3 edition.  The car runs on a V12 engine, and has standard ABS, and traction control.  The engine produces approximately 547 hp, and the car can reach a maximum speed of approximately 200 mph.  When tested by Mr. Metcalfe's Evo Magazine, there was some controversy as to the car's actual top speed.  Evo testers claimed it topped out at 198 mph, while Pagani maintained that it could go up to 208 mph and that the discrepancy was due to the car being set for maximum down force.  However, Evo countered with the fact that all parts that could create drag had been removed.  There is no word on how much the loyal Evo reader paid for Mr. Metcalfe's nearly one-of-a-kind car, but you can bet it must have been a very large number for Mr. Metcalfe to be willing to part with the vehicle.