The Half A Million Dollar Lamborghini Superveloce Roadster Is Finally Here

By B. George Young on September 6, 2015 in Articles › Celebrity Cars

While millions of dollars was changing hands at the classic car auction at Pebble Beach recently, Lamborghini used the event as an opportunity to showcase one of their latest and greatest offerings, the Aventador LP 750-4 Superveloce Roadster. This new super-luxury car is the fastest drop-top to ever be produced by Lamborghini.

President and CEO of Lamborghini, Stephan Winkelman said at the press conference that this car "is the purest, most sports-oriented and fastest series production Lamborghini ever." He went on to say that this new model "represents our commitment to satisfying our passionate clients with immensely emotional driving dynamics combined with an extraordinary open air experience."

The Aventador's Roadster version joins the hard top variant which was recently introduced at the Geneva Motor Show. Both versions will feature a 6.5 liter V12 engine capable of 750 horsepower. The SV Roadster will be able to climb from 0 to 60 miles per hour in 2.9 seconds and will have a top speed of over 217 mph. 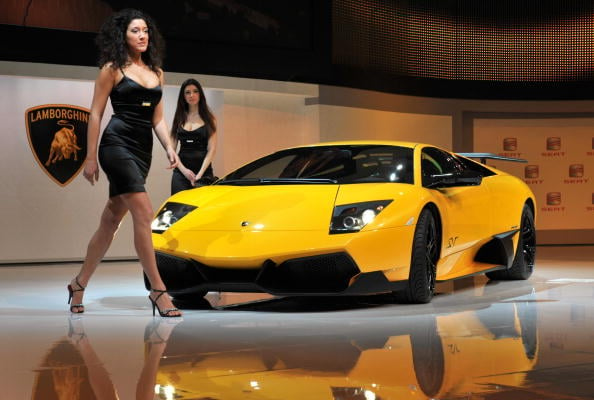 Everything about this car has been designed for speed and Lambo did away with any luxuries you might expect inside in order to save weight. Lamborghini also plans on releasing a crossover SUV named the Urus to their lineup soon. The Aventador LP 750-4 Superveloce Roadster will be available at the beginning of 2016 for the low price of $530 thousand.

Only 500 examples of the SV Roadster will be available and they are expected to go fast. The coupe version had 600 examples and sold out within weeks of the car's recent debut. Owners of the Roadster version will have to pony up about $37 thousand more for the drop-top than for the hard top variation.

The original Lamborghini Aventador Superveloce provided the inspiration for the most expensive road production car ever made, the $4 million Lamborghini Veneno.  The name Superveloce means "super-fast" in Italian and the car was the first to use a soft carbon-fiber basic fabric called "Carbon Skin."  Other versions of the Aventador have been owned by celebrities such as Kanye West, Nicki Minaj, Chris Brown, Floyd Mayweather, Tyga, and Birdman, so we will have to see if they will be among the 500 lucky drivers to get a new Roadster variant.