People act very strangely when they suddenly come into money.  Think of all the lottery winners who are famous for half a second and then mysteriously disappear.  If you ask any of them, they almost all say the same thing, "My life was actually more manageable before the money".  For men and women in countries that have been poor for decades, but have suddenly reaped the rewards of globalization, the shift in fortune is even more dramatic.  When an entire country is seemingly wealthy overnight, people do some weird things.  Case in point – China.  A generation of men and women have made their fortunes by producing goods and parts more cheaply than anywhere else in the world.  They have been amassing their fortunes long enough that their children are now reaping the benefits of their business savvy.  As countless E! True Hollywood Stories have shown, there is little more dangerous, or ridiculous, than a rich child with no limits.  Such is the case in China, where immensely rich twenty and thirty-somethings are constantly on the lookout for new ways to both show off their wealth and entertain themselves. 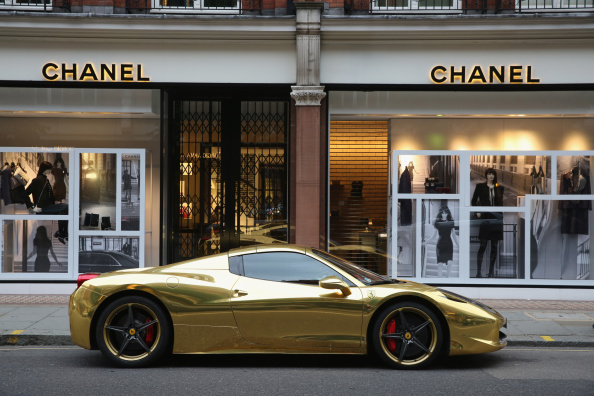 A recent trend has been to paint or wrap luxury cars in gold.  Yep.  You read that correctly – gold.  It doesn't really matter what car as long as the car is high-end.  This list seems to include anything by Ferrari, Lamborghini, Porsche, Rolls-Royce, Bentley, Infiniti, or BMW.  Oh!  Limousines count, too.  The general population seems to take these ostentatious displays of wealth in stride.  The bright gold cars are parked at malls and movie theaters like any other vehicle and nobody really bats an eye.  However, the cops have been known to confiscate one or two of the vehicles for being just too, too eye-popping.  It is hard to tell what constitutes too much versus all right when looking at a luxury vehicle wrapped entirely in gold, but apparently China's police force has it figured out.