By Paula Wilson on October 31, 2012 in Articles › Celebrity Cars

Celebrities often jump on board various causes and trumpet their participation in a variety of ways.  Some of their support for their particular cause is a little difficult to comprehend (Lady Gaga's meat dress comes to mind), but other times, the actor, director, model, or musician, actually puts their money where their mouth is.  Such is the case with George Clooney.  In addition to being one of Hollywood's most sought after performers, the Oscar-winning actor, and multi-award winning director, has long been a vocal proponent of green initiatives.  Mr. Clooney has somehow developed an air of sophistication, class, and prestige that is most often associated with Hollywood stars of yesteryear, so it is always a little bit surprising when he says or does anything that plants him firmly in the modern world.  His purchase of the first Tango T600 in 2005, was a very modern, even futuristic, choice. 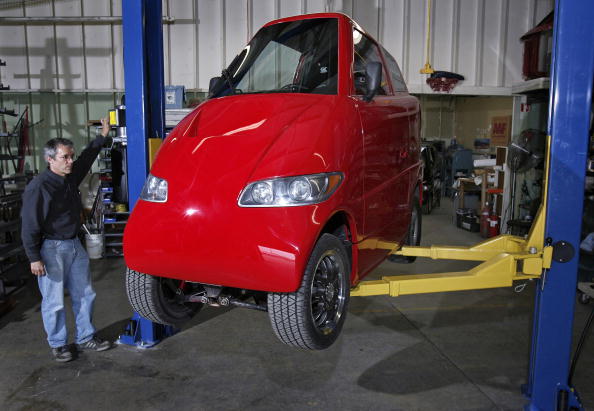 The Tango T600 is a car designed by a Spokane, Washington firm called, Commuter Cars.  The vehicle is notable for the fact that it is completely electric, and is thinner than most motorcycles, making it incredibly easy to park.  It is only 8'5″ long and 39″ wide, but it can reach speeds of 150 miles per hour, and can go from 0-60 mph in 4 seconds.  The battery can be charged with a standard dryer outlet in 3 hours, or if you're in a hurry, it can be charged to almost full capacity with a 200-amp charger in 10 minutes.  The car runs on a variety of 12 volt batteries, or on lithium-ion batteries that cost an additional $25,000 to $45,000.  Two electric motors keep the wheels turning, and the vehicle can go up to 60 miles before needing a recharge on the 12 volt batteries, or up to 150 miles with the lithium-ion batteries.  The car is actually quite heavy, mostly because of the battery, and weighs in at around 3,000 lbs.  Commuter Cars ran into production problems after producing their first vehicle, and were not able to produce another until 2008.  They are now releasing them more regularly, and they cost around $106,000 each.  The company is attempting to secure funding for the development of two less costly models, but, it is apparently quite tough to convince a country that is known for loving its large vehicles, to fork money over to a small, electric car manufacturer.  George Clooney may have to do more than buy one of the vehicles, if he really wants to support the initiative.