By Paula Wilson on November 29, 2012 in Articles › Celebrity Cars

The Game, also known as Jayceon Terrell Taylor, has managed to build multiple solid careers.  He is a successful rap artist, producer, actor, and entrepreneur.  Mentored by Dr. Dre, he has emerged as the artist who seems to have listened most closely to his teacher, even though he subsequently left Dr. Dre's label, and has had some very public feuds with other artists on his former label.  The Los Angeles native has released four successful solo albums since his debut album, "The Documentary", dropped in 2005.  His first two albums went multi-Platinum or Gold, and all of his albums have reached #1 on multiple charts, including the US R&B and Rap charts.  His fifth studio album, "Jesus Piece" is slated for release in late 2012.  He has also enjoyed a moderately successful acting career, appearing in the films, "Waist Deep" and "Street Kings", among other projects.  He is currently starring on his own VH1 reality show, "Marrying the Game".  When he is not performing, recording, acting, or producing, he collects cars.  His most recent acquisition is a black and yellow Bugatti Veyron. 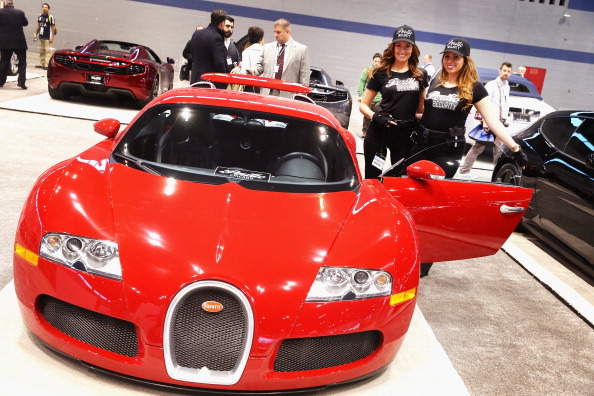 The Bugatti Veyron holds the distinction of the being the fastest street-legal car in the world.  It can reach speeds of 267 miles per hour and runs on an eight liter, quad turbocharged W16 cylinder engine.  The vehicle has an electronic governor so that it does not go so fast that the wheels disintegrate.  The transmission can function in semi-automatic or fully-automatic modes, and shift time is less than 150 milliseconds.  Replacing the specially-designed transmission costs $120,000 alone.  Special Michelin PAX run-flat tires are required in order to handle the vehicle's speed.  A set of four tires runs $25,000, and can only be mounted at one particular place in France, at a cost of $70,000.  The car has ten radiators, and the brakes are carbon fiber reinforced silicon carbide composite discs, that are cross drilled and radially vented, so that they do not begin to lose efficacy as quickly as standard brakes.  The current cost of the vehicle is between $1.7 million and $2.7 million, depending on whether you get the standard Veyron, or the Super Sport.  Owners can customize their interior and exterior colors.  Apparently, when The Game was dropping a couple million on his new ride, he was feeling like black and yellow would be a distinctive combo.