The Future Of Bentley Could Be The EXP 10 Speed 6

Bentley prefers quality over quantity. They only have a few cars in their lineup, so when a new model comes along it must be elite to make the cut. This year at the Geneva Motor Show, Bentley debuted their EXP 10 Speed 6 concept car. The stunning green sports car certainly got people talking, even if it might not be produced until a few years from now.

The EXP 10 Speed 6 seems to be a smaller sports car that Bentley could slot below their Continental model. Some are calling it a "baby" Continental GT and it appears to be lighter and more agile. This two seat coupe has drawn comparisons to the Aston Martin Vantage and the Maserati Ghibli. Bentley could be following McLaren's lead as they are also going with a smaller and more affordable Sports Series which includes the 570S Coupe. 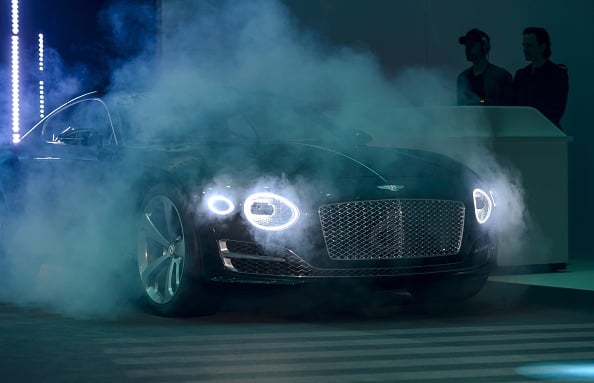 The folks at Bentley have called the EXP 10 Speed 6 a "potential future model line" and a "bold vision for a brand with a bold future". Details about the car's engine have not been released and the number 6 does not necessarily mean it will have a 6-cylinder. The 10 Speed 6 appeared to have a hybrid powertrain when it was displayed. It features mesh front grilles and new headlights that will "wake up" when they sense someone is near the vehicle.

The grille, which is 3D printed, hides the number 6 which is only viewable at a certain angle. Speaking of angles, the doors of this car open at a specially designed angle for added effect. The doors are also secured with a 3D printed part, a single hinge. The interior of this luxury car was inspired by Bentley's love of quilted leather upholstery and features hand finished cherry wood elements as well. It even comes with a special rear compartment designed for your matching luggage.

The car's name refers to Bentley's Speed Six "Old Number One" car which won the Le Mans back in 1929 and 1930. At this time Bentley has not announced a price for this car, but it is likely to start at around the $200,000 range. It will likely have many celebrity owners just like the Continental GT.