By Brian Warner on January 5, 2015 in Articles › Celebrity Cars

Prior to today, Merriam-Webster defined the word gaudy as "marked by extravagance and sometimes tasteless… Very large or impressive, extravagantly bright or showy, garish, flashy, ostentatious… Cheaply showy in a tasteless way."

After today, the 200 year old dictionary company might as well remove their description completely, and replace it with a photo of Floyd Mayweather. And not just any photo, this photo that he just uploaded to instagram:

"Welcome to my toy world! Who wants to come out & play?" 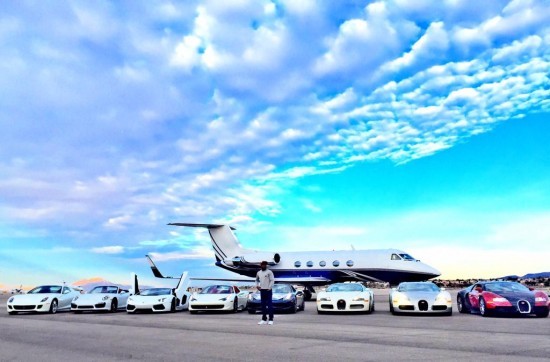 – He never wears the same pair of shoes twice. When he's done with a pair, he leaves it for someone to find, typically hotel staff.

– When he travels, he flies on the private jet pictured above. But he does not let his entourage travel with him. The entourage travels in their own private jet so Floyd can have private time. Also, Floyd is reportedly nervous about having his super-heavy bodyguards all on one plane.

– Floyd also has a penchant for expensive jewelry. Thieves once jacked $7 million worth of jewelry from his Vegas house.

– Floyd is an infamous gambler who regularly thinks nothing to drop $1 million on a random college game or rival boxing match. In June 2013, he reportedly won a $5.9 million bet placed on the Miami Heat vs. the Indiana Pacers.

– When he was released from a Vegas prison after serving a 90 day sentence for domestic violence, he went straight to the private airport and flew to Miami with a briefcase full of $1 million cash. He did not have the briefcase when he returned a few days later.