The car's name is Bond, Aston Martin DB9 GT Bond. Soon fans of the James Bond film franchise will be able to get their hands on a special edition car whose maker is celebrating a 50 year association with the series. The brand new Bond Edition will coincide with the release of the newest film in the 007 franchise, Spectre, which is set to be released in late October. This special edition will be limited to only 150 examples so you better act fast.

This DB9 GT variation will be loaded with special features both inside and out. On the outside, the DB9 will have a "Spectre Silver" paint job with Aston Martin badges that are cast from sterling silver. This super luxurious vehicle will feature 10-spoke gloss black diamond-turned 20-inch alloy wheels as well as 007 Bond Edition exterior badging to show it off. This Aston Martin will have a carbon fiber front splitter as well as rear diffuser and it will also have hood vents, a grille, and side strakes in bright aluminum. 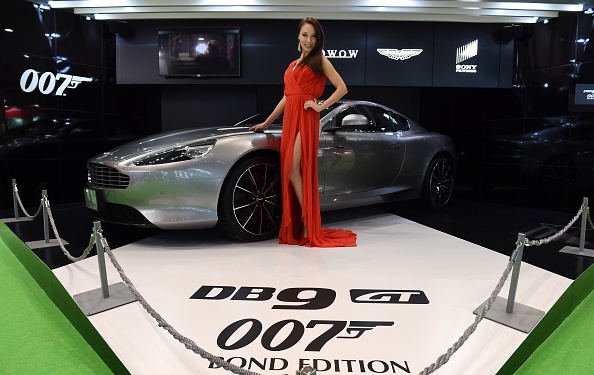 Inside the Bond Edition will have a special Bond-themed startup screen on the car's AMi II touch screen. Gun barrels will be embroidered on the rear seat divider and the car will also have numbered sill plaques. This car also comes with a special Omega Seamster Aqua Terra 150M James Bond Limited Edition watch which retails separately for $7,350, and a 21 inch Globe-Trotter case finished with an embossed leather luggage tag.

Under the hood the Bond edition features a 6.0 liter engine capable of 540 horsepower paired with a Touchtronic II six-speed transmission. You may not be able to drive exactly like James Bond, but the car can go from 0 to 60 miles per hour in 4.4 seconds and has a top speed of 183 mph.  The price of the Aston Martin DB9 GT Bond Edition will be $237,007.

Although this car will certainly be something special, the DB9 will not appear in the upcoming Spectre film. Instead, its successor, the DB10 will make its debut in the new movie. Ten special DB10's were made especially for the new Bond film. Celebrities like Kanye West, Adam Carolla, Ice T, and Joe Jonas have owned Aston Martin DB9s so perhaps one of them will get their hands on one of these special Bond Editions.