By Joseph Gibson on June 4, 2012 in Articles › Celebrity Cars

Check out Eminem's car! Rapper Eminem doesn't have the same glitz and glamor persona that a lot of other famous rappers do. So it makes sense that instead of driving a million-dollar Bugatti or Porsche or something, he's got something a little less flashy (but still really expensive): A Hummer H2. With a base price of around $60,000, this isn't exactly a Ford Focus, but it's still pretty restrained compared to the cars that some other rappers and celebrities drive around. 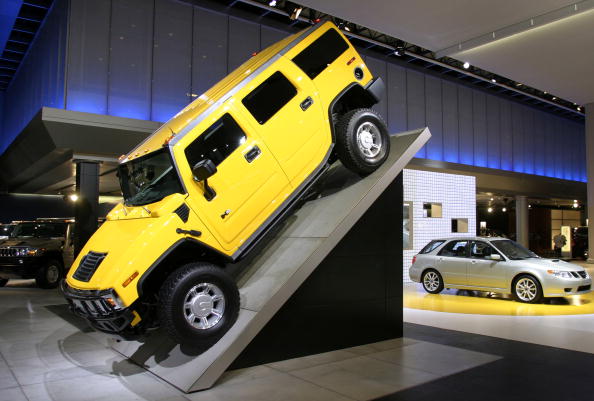 Some have pointed out that it's a little strange for Eminem to own such an expensive and bulky sport utility vehicle since he rarely has occasion to drive such a vehicle. Unlike many other celebrities, he doesn't spend a lot of time going out – preferring to focus on songwriting and working in the studio rather than partying. But even if he did – it's not like he's taking his H2 over rocky terrain to go mountain climbing or hiking or camping or whatnot.

As for the H2, it has elements of a traditional SUV, a hummer, and a pickup truck, so if Eminem DOES decide to do any heavy lifting, like from the quarry to his house or something this vehicle has him pretty much covered. It also has off-road capability, so if Eminem ever does end up killing his ex-wife and going on the run from the authorities we might have a pretty interesting high speed chase to watch on TV.

Right now, Eminem is working on his eagerly anticipated eighth studio album. It doesn't have a title as of yet, but he's said to be hard at work in the studio tinkering with sounds and laying down tracks. As for when it's going to be released, that seems to be up in the air at this point, but when it finally comes out it's a safe bet that Eminem will have a lot more money to buy cars with.