Elon Musk's Car: A Futuristic Car for the Future of Car Manufacturing

By Paula Wilson on October 22, 2013 in Articles › Celebrity Cars

Elon Musk has always been a little ahead of the curve, it seems.  He taught himself computer programming when he was a kid.  By age 12, he'd coded and sold his first computer game, Blastar.  He went on to attend the Queen's University in Ontario, and ultimately graduated from the Wharton School at the University of Pennsylvania with dual degrees in business and physics.  He moved on to Stanford University to attend a Ph.D. program in physics, but decided school was no longer a useful pursuit.  He dove directly into his career plans, dropping out of Stanford two days after the first semester began.  His first venture was a software company called Zip2, which he founded with his brother, Kimbal.  Their primary product was an internet-based guide for cities, that was geared towards the publishing industry, particularly newspapers.  The brothers sold Zip2 to Compaq in 1999 for $307 million in cash and $34 million in stock options.  From there, he launched X.com, an email payment company.  He subsequently bought Confinity, the company that operated PayPal.  Musk merged everything, renamed it all PayPal, and the rest is history.  He has continued to launch new businesses since then, including SpaceX, his aerospace design and development company, and Tesla Motors, the company behind a range of increasingly popular electric sports cars.  He is on the forefront of multiple technologies.  Which is why it seems only fitting that he would buy a car that represented the future when it was first introduced.  He just bought James Bond's submarine car, a "futuristic" vehicle based on the Lotus Esprit. 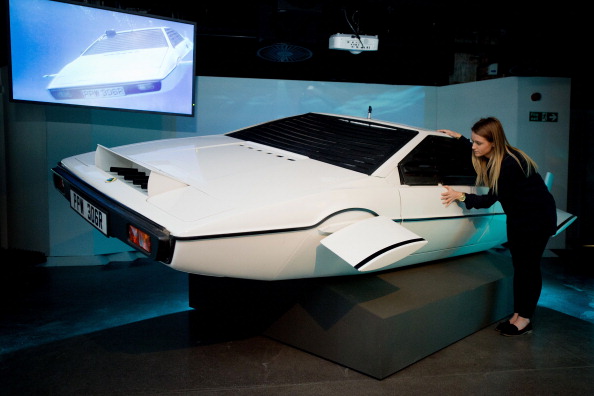 The Lotus Esprit was built from 1976 to 2004 by Lotus Cars.  The 2-door coupe had a fiberglass body, and ran on the Lotus 907 4-cylinder engine, which produced 160 bhp.  The car could go 0-60 in approximately 7 seconds, and had a top speed of 133 miles per hour.  There are plans to relaunch the vehicles in 2014.  The Esprit used in "The Spy Who Loved Me" in 1977, was fitted with fins which extended out of the vehicle once Roger Moore's OO7 drove it into the water.  An entirely different Esprit was used to show the wheels retracting.  Yet another Esprit was used in the water, along with a stuntman in full scuba gear.  Mr. Musk reportedly purchased the submerged version of the vehicle for $989,000, because he wants to study it, with an eye to actually building a working model someday.  If anyone can do it, he probably can.