How Not To Drive A Ferrari On A Rainy Chinese Highway

By Brian Warner on January 18, 2014 in Articles › Celebrity Cars

After viewing these photos of two wrecked Ferraris on a Chinese highway, I can't help but be reminded of a classic lines from the 1996 Nicolas Cage masterpiece, The Rock: "Hey man, you just f*[email protected]! up your Ferrari!". And another line from a few minutes earlier delivered in perfect Sean Connery brogue: "I Hope you're insured!" Oh, in case you were worried, by some miracle, every single passenger and driver walked away from this crash with just minor injuries.

Yesterday in the Ansai province of China, a group of ten Ferraris were racing down the rainy wet roads of the Maoming Expressway when all of a sudden things took a turn for the worse. Literally. At around 3pm, the last two cars in the group, a $200,000 Ferrari California and a $260,000 Ferrari 458 Spider, collided in what might be the most insane supercar crash we've ever seen. After you see the photos of the aftermath, you'll agree that it's a miracle no one was seriously hurt. The 458's rear-mounted 575 horsepower V8 engine was stripped completely out of the car and lay totaled on the road. The entire front section of the California was shaved down to nothing. 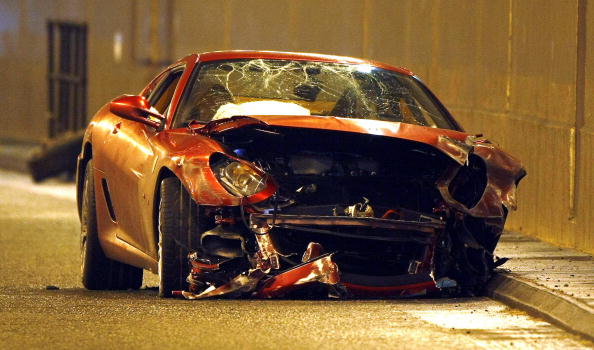 When it comes to owning a Ferrari, there are four rules you must follow:

And let it be known that I did not make a single Asian driver joke throughout this entire article… That would have been too easy.