By Paula Wilson on November 7, 2012 in Articles › Celebrity Cars

Donald Trump is a master at marketing.  There is no other way to explain how a man with a bad toupee and a scowl, has managed to become one of the world's richest men, declare bankruptcy, and then rise from the ashes of his own mismanagement to become a successful television personality and billionaire once again.  It is astonishing, impressive, and more than a little bit depressing.  Over the course of the last eighteen months, he has been in and out of headlines because of his involvement in politics.  First, he entertained a presidential run, then he launched a public semi-investigation into President Obama's citizenship.  When that all backfired, he continued to make random appearances, supposedly revealing political secrets and potentially earth-shattering information about the President.  His press conferences, commercials, and tweets, which have grown increasingly unhinged over time, have meant that he has remained exactly where he wants to be throughout this election year – front and center.  Who knows whether he actually believes any of the things he has been saying.  Mr. Trump seems to adhere to the playground bully methodology.  The attention itself is more important than how he goes about getting it.  When he is not out stirring up controversy, one of the ways he attracts attention is by his choice of vehicle.  One of his favorite acquisitions is a discontinued model that screams, "Look at me!" 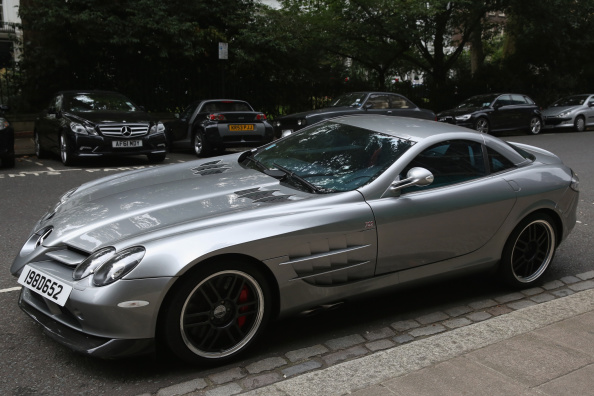 Donald Trump's car is a $400,000 Mercedes-Benz SLR McLaren.  The result of a joint venture between German car company, Mercedes-Benz, and British company, McLaren Automative, the SLR McLaren debuted in 2003.  The coupe was discontinued in 2007, and the roadster version stopped production a year later.  The two-door car features a 5.4 liter supercharged V8 engine, and 5-speed automatic transmission.  It can go 0-60 in approximately 3.4 seconds, and is recognized for having a better fuel economy than many of its competitors, such as the Lamborghini Murcielago, and of performing very well on speed and top gear acceleration tests.  In 2006, 2007, and 2009, limited editions of the car were released as the McLaren 722, the 722 Roadster, the Roadster 722 S, and the 722 GT.  In 2011, 25 units of a special vehicle, called the McLaren Edition were also produced.  The new version included various alterations to the bodywork, and improvements to steering and suspension.   Donald Trump's McLaren is one of the earlier models, and there is no denying that the car is an attention getter.