Dina Lohan's Car: Not Even a Rolls-Royce Can Save the Lohans

By Paula Wilson on October 1, 2013 in Articles › Celebrity Cars

Dina Lohan is kind of a mess.  The mother of Lindsay Lohan and Ali Lohan supposedly began her professional career as a dancer and actress.  She claims to have been a Radio City Rockette, though there is no record of her having had that job ever.  She married Michael Lohan in 1985, and the pair went on to have four children.  Lindsay Lohan, their oldest daughter, began acting when she was a child, and by her early teens she had become one of Hollywood's most popular young stars.  She had a string of hit films, including the remakes of "The Parent Trap" and "Freaky Friday", and the smash hit comedy, "Mean Girls".  She also released a Platinum cerfitied album.  She was on her way to greatness.  Then it all went to hell in a hand basket, and Dinah Lohan was right there with her daughter's downward spiral every step of the way.  In fact, she seemed to view her daughter as a stepping stone of sorts.  She launched a reality series called "Living Lohan", which starred she and Lindsay's younger sister, Ali, capitalizing on her eldest's daughter growing fame/infamy.  She also appeared on various entertainment news magazines weighing in on her daughter's issues.  She and Michael separated in 2005, and divorced in 2007.  Like everything else Lohan-related, their messy split was front page news.  Most recently, she's made headlines for being arrested for speeding and driving under the influence in Long Island.  For people wondering where Lindsay Lohan's addictive personality comes from, look no further than Mom.  Not one to show up anywhere without some sort of fanfare, Dina Lohan showed up at the DUI hearing in a brand new Rolls Royce Phantom. 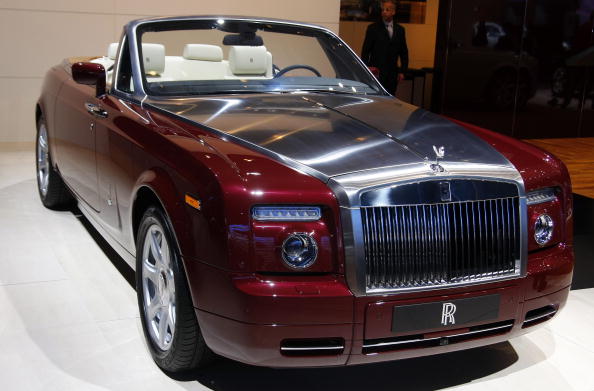 The Rolls-Royce Phantom was introduced in 2003, and it is the first vehicle made by Rolls-Royce after the company was acquired by BMW.  The car is a full-size luxury vehicle, and is available as a 2-door drophead coupe/convertible, a 2-door coupe, or a 4-door saloon.  It runs on a 6.75 liter V12 engine that produces 453 bhp, and comes with either ZF 6-speed or 8-speed automatic transmission.  Some of the extras that set the car apart include a navigation system with voice recognition, a 26-speaker top-of-the-line sound system, 18-way power front seats, heated and cooled cup holders, wireless headphones, an air-conditioning system with 5-zone climate control capabilities, and 21-inch cast forged aluminum alloy wheels.  The car costs approximately $420,000, which is a pretty large amount of money for a celebrity Mom who doesn't actually appear to have a job.  The fact that Dina Lohan is driving around in one, may help explain why the bank is foreclosing on her house.