By Paula Wilson on November 30, 2012 in Articles › Celebrity Cars

You know your famous when people actually want to buy a vehicle you managed to beat to hell.  Cristiano Ronaldo is widely considered to be one of the best soccer (football to the rest of the world) players in the world.  The Portuguese athlete, who is currently playing forward for Real Madrid, is currently up against Lionel Messi, and Andres Iniesta in the race for the World Soccer Player title.  That's not bad company.  He is the first player to score against every other player in La Liga in a single season ever, and in an age when social media popularity matters, he has become the first athlete to reach 50 million followers on Facebook.  His ability on the field, and his popularity off of it, have made him a rather wealthy young man.  He has the car collection to prove it.

People Magazine's "Sexiest Athlete" of 2012, owns an Audi R8, a Ferrari 599 GTO, and a Lamborghini LP700-4 Aventador, among a number of other vehicles.  Back in January 2009, he crashed his Ferrari 599 GTB into a barrier near Manchester Airport.  He was fine, but the car was a bit of a lost cause.  Except, if you are Cristiano Ronaldo, someone out there is willing to pay good money for your broken stuff. 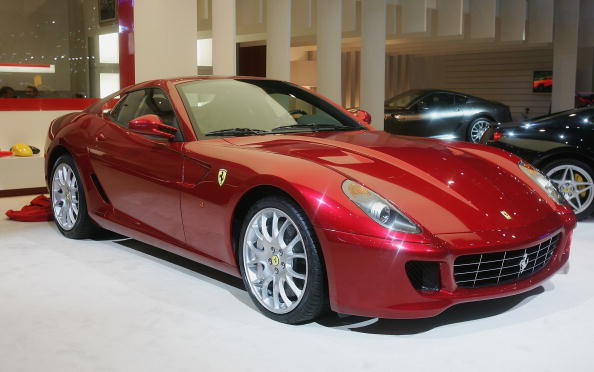 Cristiano Ronaldo's car is on sale for 50,000 Euro (approximately $65,000 US).  The Ferrari 599 GTB Fiorano was produced from 2006 to 2012.  The un-smashed version costs anywhere from $278,000 to $320,000 depending on your choice of "bells and whistles".  The car runs on a 6.0 liter Tipo F140C V12 engine.  The engine design is notable for exceeding an output of 100 hp without the use of forced-induction like with a supercharged or turbocharged motor.  The MagneRide suspension has received rave reviews for improving handling and comfort over other sports models.  It can go 0-60 in 3.7 seconds, and can reach a top speed of 205 miles per hour.  Mr. Ronaldo was most likely prevented from serious harm by the car's anti-roll bar and magnetorheological shock absorbers.  The vehicle is pretty banged up, but some slightly macabre fan will most likely snatch it up, just for a piece of a man who is quite possibly the world's most famous athlete.