Jay-Z and Kanye West are undoubtedly two of the biggest names in hip-hop. So what determines who the "King of Hip Hop" really is? Is it the amount of money they have made, or the number of hit singles and records they have each had? What if these rappers lived in a world where this title was determined by an old fashioned Fast and Furious style car race? Both of these rap moguls would have to choose a car from their existing collection and they both have some pretty fast ones to choose from. Let's look at how each of their car collections would stack up.

Jay-Z's car collection includes a Ferrari F430 Spider, a Porsche 911 Carrera Cabriolet, a Rolls-Royce Phantom, a Maybach 62S, and a Jeep Wrangler. With so many amazing cars to choose from, it would be really tough to pick which one to use in the big race. Jay-Z owns well over $20 million worth of cars, which isn't much compared to his net worth of $650 million.

His Pagani Zonda F has a top speed of 214 miles per hour and can go from 0 to 60 mph in 3.6 seconds. The car's 620 horsepower would certainly come in handy in a race. Maybe Jay-Z would elect to race his Bugatti Veyron Grand Sport, which was a gift from Beyoncé for his 41st birthday. It has a top speed of over 200 miles per hour and includes a turbo quad W16 engine for added power.

Jay-Z might want to borrow Beyoncé's Mercedes-Benz SLR McLaren which cost her over half a million dollars. This supercar can go from 0 to 60 in 3.6 seconds and has a supercharged V8 engine with 626 horsepower. He may not, however, want to take his Maybach Exelero out of the garage since it came with a price tag of $8 million! Jay-Z showed off this car in his music video "Lost Ones." It can go from 0 to 60 mph in 4.4 seconds and has a V12 engine with 700 horsepower.

Personally I would have to recommend the Pagani Zonda F. It can get off the line really quickly and can top out at such a high speed.

Next up, we have Mr. Kanye West. His collection includes a Lamborghini Aventador, which was a gift from Kim Kardashian, an Aston Martin DB9, a Mercedes-Benz McLaren SLR and a $1.7 million Mercedes-Benz SLR Stirling Moss. Kanye is also apparently big on buying armored vehicles, but they would not be the best thing to use in a race. His $130 million net worth pales in comparison to Jay-Z's bank account, but how does his car collection stack up? 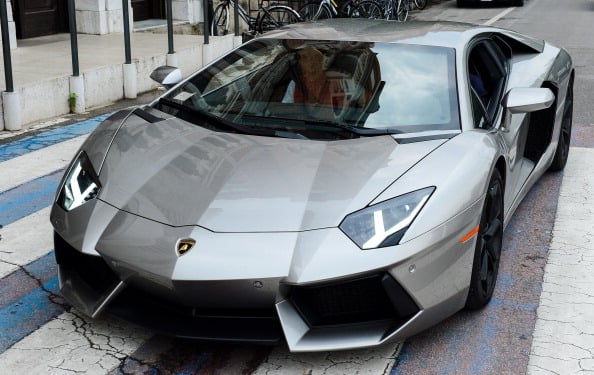 His Mercedes G500 is worth almost half a million dollars and is powered by a 5.5 liter V8 engine. His 35th birthday present from Kim was a 2012 Lamborghini Aventador worth $400 thousand. This amazing car would be my pick for Kanye to race and it has a top speed of 217 miles per hour, which barely beats Jay-Z's Zonda. It can also go from 0 to 60 mph in just 2.9 seconds which also beats anything owned by Jay-Z.

Of course anyone can get behind the wheel of a super-fast luxury car, but actually being able to drive one can be a different matter. Kanye West was involved in a near-fatal car accident while driving a rental Lexus in 2002. He also had a bit of a problem when he tried to enter Kim's home while the entry gate was closing and it clipped the car on both sides. Jay-Z seems to have a clean driving record, but his wife Beyoncé had a close call with a taxi in 2010.

So who do you think would win this hypothetical race between two of the biggest stars in hip-hop, Jay-Z and Kanye West? Do you agree with the cars they should choose for the race, or should they go with something different?