Chris Brown's Car: Can You Say Famous and Slightly Unhinged?

By Paula Wilson on October 15, 2012 in Articles › Celebrity Cars

Chris Brown started out as such a good, church-going young artist.  He taught himself to sing and dance, and sang in the church choir, and was an all-around little angel.  In 2004, at the tender age of 15, he signed with Jive Records, and released his first album in 2005.  It went double-platinum.  His second album, "Exclusive", was an even greater success, spawning multiple chart-topping singles.  He has since released three more albums, and while none have achieved the level of success of his first two albums, they have all sold quite well.  Unfortunately, Mr. Brown has not been so successful in his personal life.  Like many stars who find fame early, he seems to have some self-control issues.  This was made abundantly clear after he beat up his now ex-girlfriend, Rihanna.  Though his behavior seemed to blindside many of his fans, the signs that he was in a tail-spin were actually all around.  One of them included the way he chose to customize his brand new Lamborghini Gallardo. 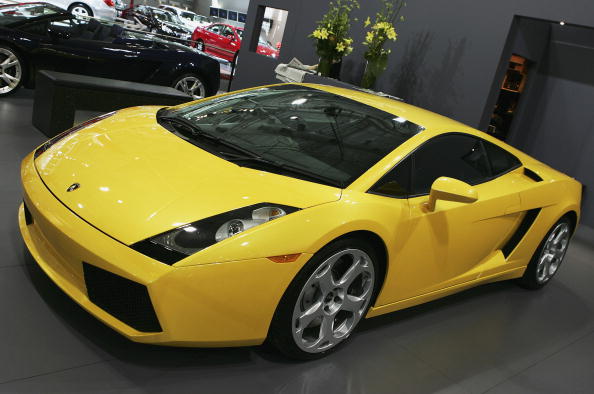 Chris Brown's car is painted to look like an F-86 Sabre jet fighter, complete with rivets.  The Lamborghini Gallardo is the most purchased of the Lamborghini vehicles, and features a 5.0 liter V10 engine, and six-speed transmission.  It can go 0-60 in 3.2 seconds, and has a top speed of 202 miles per hour.  The car retails for around $200,000.  In general, the design of a sports car does all the talking.  The paint jobs are fairly simple, as the focus is customarily on the line of the car.  Chris Brown's F-86 paint job on his Gallardo very much bucks this trend.  With all of the negative attention he received from his assault charge, he is now probably wishing he had a slightly more anonymous ride.