Since Celebrity Net Worth seems to be growing pretty nicely, I've recently been thinking about buying new car. My current car is an Acura TL that drives perfectly but is almost 10 years old. Every time I get into a friend's new car, I am instantly envious of all the fancy technology that comes totally standard. Wireless iPhone syncing, touchless navigation, satellite radio, voice command controls… It definitely might be time for an upgrade. Maybe I'll head on down to my local Acura dealership this weekend and trade up to the 2014 TL. Or maybe I'll splurge a little and jump up to the luxurious Acura RL! Or maybe I'll say screw it and just buy a gold coated Ferrari 458 Spider…

This car was spotted in Kensington, London parked on the street outside a kickboxing gym. It turns out the car is owned by Iraqi-born kickboxing champion Riyadh al-Azzawi. Born in Baghdad, Riyadh al-Azzawi was a six-time Iraqi National Champion and two time Arabic Champion before moving to the UK. He is now a two time British Champion and one time European Champion with a lifetime record of 47-0 with 35 wins by knockout. 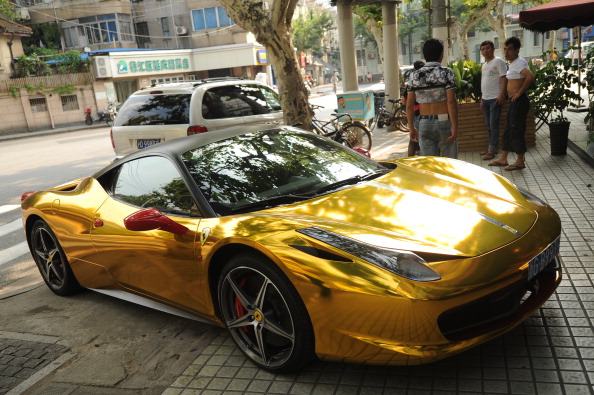 Riyadh reportedly spent $7,000 USD on top of the $335,000 base price to have the car wrapped in gold vinyl. It's pretty incredible looking, don't you think?