By Paula Wilson on September 23, 2013 in Articles › Celebrity Cars

Charlie Hunnam is yet another Brit who has managed to come across the bay, and win legions of fans, through a combination of great looks and an even greater American accent.  Born in Newcastle upon Tyne, Tyne and Wear, England, the British actor graduated from Cumbria College of Art and Design with a degree in Theory and History of Film.  He began his professional on-camera career appearing on the children's show, "Byker Grove".  Interestingly, he was invited to audition for the role after the show's production manager saw him goofing around while drunk in a shoe shop.  He broke through in 1999, when he was cast as Nathan Maloney on the groundbreaking series, "Queer as Folk".  Since then, he has gone back and forth between film and television work, appearing in such projects as "Young Americans", "Undeclared", "Abandon", "Nicholas Nickleby", "Cold Mountain", "Green Street", "Children of Men", "The Ledge", Deadfall", and "Pacific Rim".  Since 2008, he has starred as Jackson "Jax" Teller on "Sons of Anarchy".  Earlier this month, it was announced that he was cast as the male lead in one of the most anticipated film adaptations in years.  The role of Christian Grey in "Fifty Shades of Grey", could either catapult his current level of stardom into the stratosphere… or it could just totally suck the life out of his acting future.  The internet is rife with people who disagree with the casting choice, but we'll have to wait until sometime in 2014 to pass judgement.  (If you've read the books, that is.)  He seems unconcerned about all the hoopla, and can be found riding around Los Angeles on his Harley-Davidson motorcycle.  Apparently, he likes bikes as much as his character on "Sons of Anarchy". 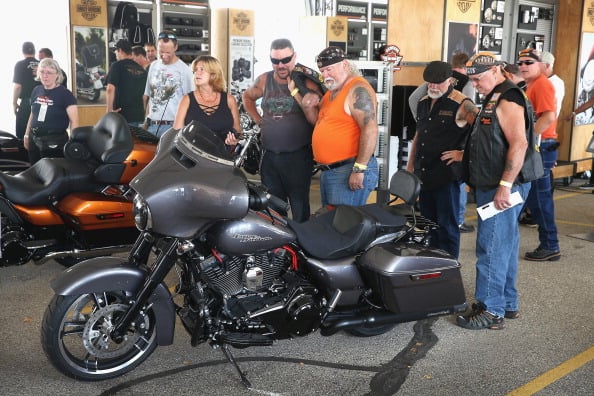 Charlie Hunnam's vehicle of choice is a Harley-Davidson Street Glide motorcycle.  Harley-Davidson has been making bikes since 1903.  Located in Milwaukee, Wisconsin, the motorcycles manufactured by the company have appeared in a variety of films and television shows, and have become synonymous with a certain level of toughness.  The brand has taken on a life of its own, and there are now national Harley-Davidson events, clubs, restaurants, and a museum.  The Street Glide was originally offered as a lower end answer to the Tri Glide Ultra, but has been redesigned for 2014.  It runs on a Twin Cam 103 engine that was specifically developed by Harley.  The bike also features Harley's Six-Speed Cruise Drive Transmission, and comes standard with a Vehicle Information Screen, USB interface, and a Bluetooth hands-free mobile setup.  It sells for $20,399, so if you simply want to dabble in motorcycle riding, you might want to choose a less fantastic bike.