Bridget Marquardt's Car: Which is Sexier? A Porsche or a Playboy Bunny? Why Choose?!

By Paula Wilson on December 10, 2012 in Articles › Celebrity Cars

Some women aspire to be the first female President, and some women aspire to be Playboy Bunnies.  Bridget Marquardt falls into the latter group.  The Oregon-born, California-raised model and actress, graduated from Cal State-Sacramento with a Bachelor's in Communications, and went on to earn her Master's Degree in Communications from University of the Pacific.  In the mid-90s, she began writing to Playboy, asking how to be featured in the magazine.  Though a modeling gig appeared out of reach, she caught the eye of the head honcho, Hugh Hefner.  In 2002, she was invited to move into the Playboy Mansion as one of his girlfriends.  She became a household name appearing on the reality show, "The Girl's Next Door", which followed the lives of Hefner and his special playmates.  She also appeared on the cover of Playboy three times, and launched a moderately successful film and television career, including hosting her own series on the Travel Channel.  She left Playboy, and the Mansion, in 2009, and is currently writing and shooting short documentaries for Yahoo's Animal Nation series.  Though she took a rather roundabout path to her original career choice, Ms. Marquardt did actually end up using her Communications degree, which is more than can be said for most people.  When she is not working, the now 39-year television personality, drives around town in a Porsche Cayman. 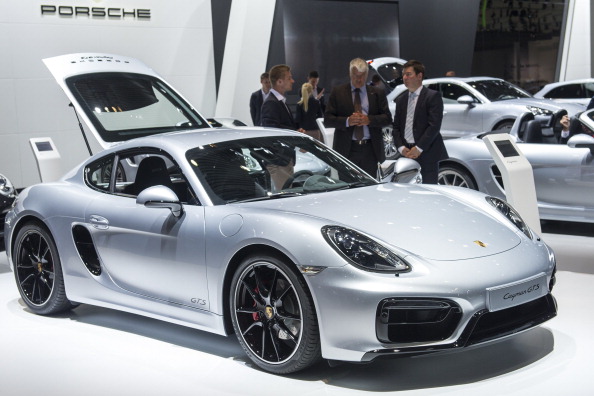 The Porsche Cayman went into production in 2006, and is two-door coupe based on the second generation Porsche Boxster design.  It runs on a 3.4 liter H6 engine, and can go from 0-60 in approximately 5. 5 seconds.  It has a top speed of 160 miles per hour, and 265 hp.  The car has won a slew of awards, including being named "All-Star" of 2007 by Automobile Magazine; Playboy Magazine "Car of the Year" 2006 (naturally); "Best Exterior Design 2006" by Wheels Automotive Design Awards; and "Best Driver's Car 2009" by Motor Trend.  It currently costs $51,400+.  If you buy one, maybe you'll attract a Playboy Bunny.  Or just feel like a Playboy Bunny while driving the car.  Whichever floats your boat.