How Did Benito Mussolini's 1939 Alfa Romeo End Up In A Barn In New York?

When thinking of the most infamous dictators in history, one that must come to mind pretty quickly is Benito Mussolini. As leader of Italy's National Fascist Party, Mussolini ruled with an iron fist from 1922 until his capture and execution in 1943. And during the latter portion of his reign, Benito was driven around in his beloved 1939 Alfa Romeo 6c Sport Berlinetta. Benito originally bought the car as a gift to his mistress Clara Petacci. And unlike most cars of that era in war-torn parts of Europe, Benito's Alfa Romeo did not end up in a scrap pile at an Italian junk yard. It wasn't destroyed by an ally bomb, and it wasn't burned to pieces by an angry mob (of course, the same can't be said for Mussolini himself). Benito's Alfa has a very unique story…

Mussolini took his famous "last ride" in the Alfa Romeo while he and Petacci were headed north to Switzerland, after escaping from prison. His vehicle was disguised as a Spanish diplomatic vehicle and was traveling as part of a caravan including his remaining supporters when it was stopped at an Italian-resistance roadblock in Dongo.

The infamous dictator tried and failed to convince the Italian resistance he was a humble German solider returning home. When their true identities were discovered, Mussolini, Petacci and most of their 15-person convoy were executed. Mussolini and Petacci's bodies were strung up at a gas station. 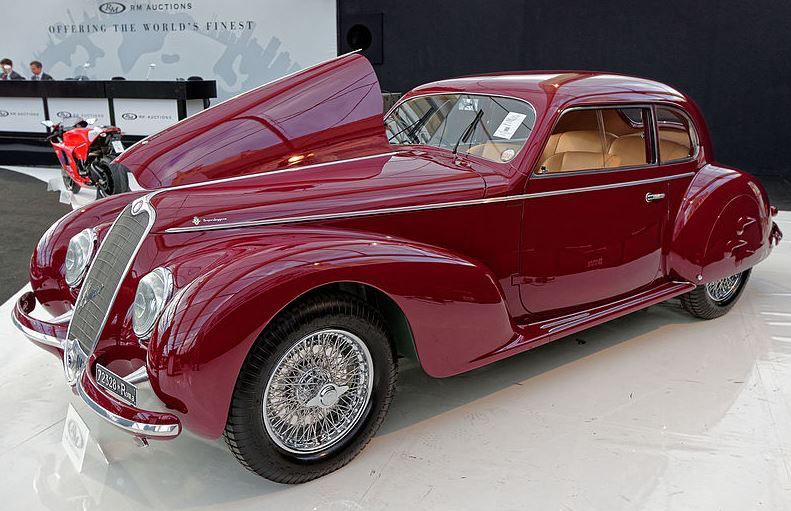 His car, however, did not meet such a cruel fate.

After he was captured, Mussolini's vehicle was confiscated by the allies and ended up in the hands of American Army officer named Major Charles Pettit. At some point towards the end of the war, Pettit arranged to have the car shipped back to his family farm in New York.

Pettit ended up using the car as his main mode of transportation for several years. You can imagine what a sight he must have been on the rural roads of upstate New York! He drove that car until it broke down and then stored it in a barn. No one thought about the rusty old car in the barn for more than two decades.

Fast forward to 1970. A local high school teacher and history buff heard that Pettit's car was somehow connected to World War II, so he bought it for $300. After doing some research, the teacher realized that this car may have actually belonged to Mussolini. He managed to get in touch with Mussolini's former chauffeur of the car, Franz Spogler, who confirmed the car's history based on photos and VIN numbers.

After that, the car changed hands a few times and was partially restored. A new engine was installed in Italy and the vehicle even ran the Mille Miglia race.

Eventually, the car underwent a two-year-long restoration at a cost of $570,000. Restoration specialists at Garage Bonfanti saved about 85% of the original body. In this careful reconstruction effort, even the original design drawing for the car was obtained from the son of the founder of the firm that designed it, Carrozzeria Touring. The interior of the car was completely restored as well.

Just this past week, the Alfa Romeo went up for sale on RM Auctions. So how much did this car sell for? Nothing. Bidding got up to $2 million but apparently that wasn't enough to meet the auction reserve price, so it did not change hands.

Perhaps no one wanted to pay such a high price for something once owned by such a horrible man. Or maybe it was just too expensive.

So, if you had the money, would you want to own this car even if it was once owned by Mussolini?