By Paula Wilson on December 6, 2012 in Articles › Celebrity Cars

Prior to Christopher Nolan's bleak take on Batman (and the series of graphic novels on which his version was based), and prior to the multiple versions of Batman that were trotted across the screen throughout the late 80s and 90s, there was the 60s television series version of Batman, starring Adam West.  Campy, a little bit bizarre, full of thinly veiled innuendo, and true to every inch of the comic book series, the original live action Batman series has remained a fan favorite to this day.  One of the best things about the show was the high level of design work by everyone from the costume crew to the scenic artists.  The 60s era Batmobile featured in the series, was customized by none other than George Barris.  The car has remained one of the most indelible images from the series, and Mr. Barris, who actually purchased the car from Ford for $1.00 and "other valuable consideration", has kept it in his personal collection for years.  However, it was recently announced that it will go up for auction in January. 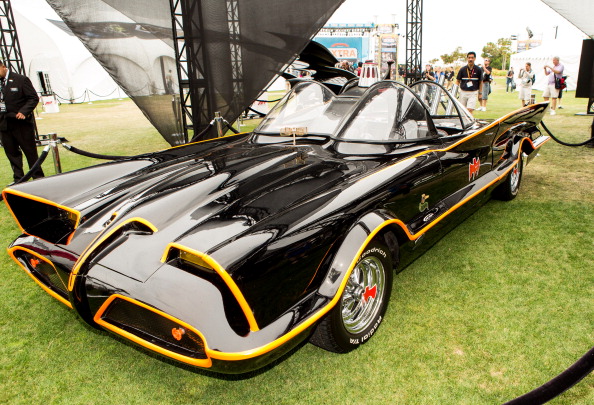 The Batmobile was designed around a 1955 Lincoln Futura concept car.  The car was first seen in the Chicago Auto Show in 1955, where it was painted pearlescent white.  It had been built by hand in Turin, Italy to the tune of $250,000.  It made its film debut in the 1959 feature, "It Started with a Kiss".  Dean Jeffries was originally hired to build the Batmobile, but when production moved up by a number of weeks, he was unable to complete the job.  George Barris agreed to make it, but with only three weeks in which to complete the job, he decided to outfit a car that was already in his shop, and which he thought might become a hit in Hollywood.  He designed the Batmobile around the Lincoln Futura that had been sitting in his shop for years, and the legend was born.  Unfortunately, the car was plagued with issues during initial filming, and production ended up replacing much of the engine and transmission with Ford Galaxie parts, but the overall design remained.  The car George Barris bought for $1.00 is now worth closer to $2 million.  If you have that kind of cash kicking around, a little bit of Bat history can be yours.