Ashley Tisdale's Car: Don't Box This Disney Starlet In… Unless It's a Porsche

By Paula Wilson on February 1, 2013 in Articles › Celebrity Cars

There are two kinds of people in this world, those who like Disney starlets, and those who can't stand them.  No matter which category you fall into, you can most likely name at least three or four of them right now, without thinking very hard.  They are very much a part of popular culture.  Ashley Tisdale is one of those Disney starlets.  After appearing in guest starring roles on multiple television shows, and in supporting roles on film throughout the late 90s and early 2000s, she caught the eye of executives at Disney, and was cast in the hit series, "The Suite Life of Zack & Cody".  As with all Disney performers, she crossed over on to other shows on Disney, guest starring on "Hannah Montana" and "Kim Possible", and voicing one of the main characters on the cartoon, "Phineas and Ferb".  However, it was her role in the "High School Musical" franchise that made her a household name, worldwide.  As with all Disney starlets, the success of that series led to her releasing two albums, the first of which achieved Gold status.  Since 2011, she has focused on more "adult" roles, guest starring on shows such as "Raising Hope" and "Sons of Anarchy" , and shooting roles in such film projects as "Scary Movie 5" and "Left Behind".  Her steady work has made it possible to afford some of the finer things in life, including a very nice black Porsche Boxster. 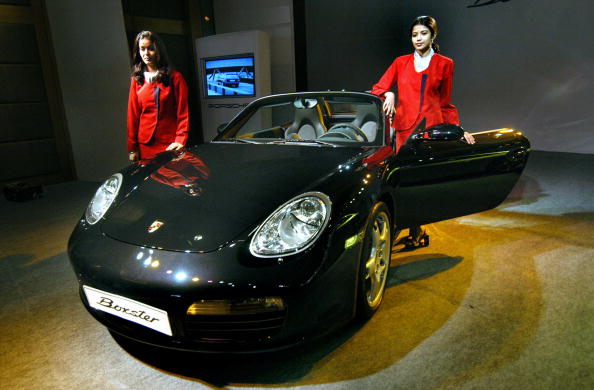 The Porsche Boxster was launched in 1996, as the first road vehicle designed by Porsche as a Roadster since the launch of 550 Spyder back in 1953.  The car has been upgraded and subtly redesigned six times since its launch in the mid-90s, with the most recent variant being unveiled at the 2012 Geneva Motor Show.  The Porsche Boxster is a 2-door roadster and the current generation is wider, longer, and more rigid than the previous generation.  It runs on a 2.7 liter flat-6 engine, and can go 0-60 in approximately 5.5 seconds.  The current generation has also been re-engineered to be 15% more fuel efficient than the previous one.  The car sells for approximately $60,000, and all you need to do is be like Ashley Tisdale, and star in a massively popular musical franchise and release some Gold albums in order to get yourself one.