Angela Lansbury's Car: Shouldn't She Be Driving Something More… Regal?

By Paula Wilson on January 2, 2013 in Articles › Celebrity Cars

Depending on when you were born, the name Angela Lansbury either evokes images of a youngish woman singing, an older woman solving mysteries, or an elderly woman with a knack for dark comedy.  Angela Lansbury has been working as an actor, successfully, for 70 years.  The almost 90-year old booked her first professional job when she was seventeen, and hasn't stopped since.  She has the resume and the awards to prove it.  She has starred in such films as, "National Velvet", "State of the Union", "The Court Jester", "The Reluctant Debutante", "The Manchurian Candidate", "Death on the Nile", "The Company of Wolves", and "Nanny McPhee".  She has also starred on such television shows as, "Studio 57", "Murder She Wrote", "Touched by an Angel", and "Law & Order: Special Victims Unit".  In addition to her work on-screen, she has starred in numerous Broadway and West End productions, including the original production of "Mame", the acclaimed 1973 revival of "Gypsy", the award-winning 1979 revival of "The King and I", and the original Broadway production of "Sweeney Todd".  She has been nominated for three Oscars, eighteen Emmy Awards, and has won five Tony Awards, and six Golden Globes.  With all of her continued success, you would think that she would be driven around town in a fancy car by an equally fancy chauffeur.  This is not the case.  Instead, Angela Lansbury drives herself around in a Kia Soul. 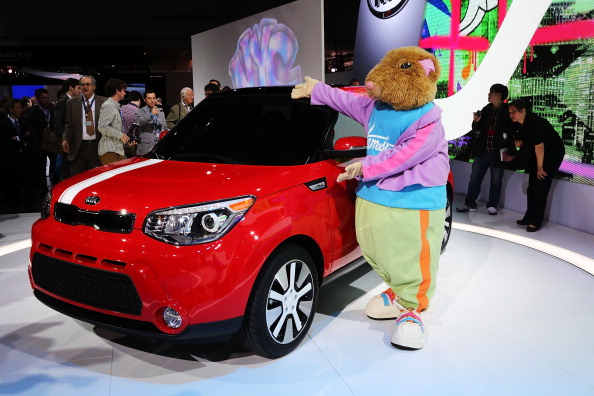 The Kia Soul went into production in 2009 in Asia, and became available in the US a year later.  The compact, 5-door hatchback runs on a two liter NU I4 engine, and has six-speed automatic transmission.  The car features navigation, UVO infotainment, climate control, heated seats, and USB ports for iPod connection.  It is also highly customizable and can include 18-inch alloy wheels, Bluetooth, cruise control, and a number of other options.  With a price of only $14,554 and a five star safety rating, the Kia Soul may actually be the perfect car for an almost 90-year old acting legend to drive around in.